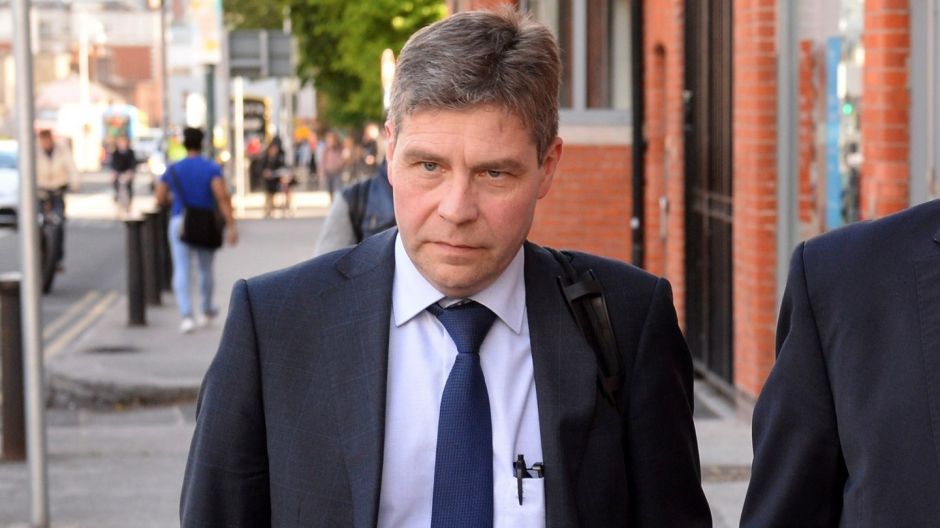 The High Court has lifted an order preserving the anonymity of one of the men convicted of kidnapping and inflicting serious injuries on businessman Kevin Lunney.

The man is Alan Harte, who last month was sentenced to 30 years in prison by the non-jury Special Criminal Court (SCC) for committing serious harm on and falsely imprisoning the Quinn Industrial Holdings (QIH) director in 2019.

The order was lifted by Mr Justice Charles Meenan on Tuesday afternoon, who dismissed an application by Mr Harte’s lawyers to further extend Mr Harte’s anonymity.

The DPP had argued that Mr Harte be named.

Citing article 34 of the Irish Constitution, which states that justice must be administered in public, the judge said he could see “no basis” for continuing the order.

The judge also said that legal safeguards remain available to Mr Harte, who is aged 40 and with an address at Island Quay Apartments, East Wall, Dublin 3, regarding any prejudice he claims he will suffer due to any publicity arising from his trial and conviction by the SCC.

During his trial Mr Harte was referred to as “YZ”. When handing down the sentence, Mr Justice Tony Hunt at the SCC described Mr Harte as the “ringleader” and the person who had inflicted most of the injuries on Mr Lunney.

Two other men involved in the businessman’s kidnapping and assault, Alan O’Brien and Darren Redmond, were also given lengthy prison sentences by the SCC.

The anonymity order, which had initially been granted by the SCC, had been extended by the High Court in December.

The order had been put in place when Mr Harte was first before the courts in connection with the offences.

It was granted because he had been due to go on trial before the Central Criminal Court in relation to an unrelated charge of murder.

That trial collapsed and the charge against Mr Harte was dismissed, after the DPP entered a nolle prosequi in the case.

However, the order was continued on a temporary basis after his conviction by the SCC.

This was done to protect the man’s rights to a fair trial as he has other unrelated criminal matters pending before the criminal courts.

Following his SCC conviction Mr Harte’s lawyers claimed that his naming by the media in reports could prejudice his rights to a fair trial before a judge and jury.

Arising out of those concerns Mr Harte launched High Court judicial review proceedings against the DPP and the SCC seeking orders including a temporary order extending his anonymity.

The High Court had made an order continuing the order till Tuesday’s sitting of the High Court.

On Tuesday Mr Harte’s lawyers had asked the court to continue the order, arguing that there was a possibility that some of the criminal matters may be heard within a six-month period.

He sought an extension until February, when one of the cases against him was due to be mentioned before the courts.

Michael Hourigan Bl, for Mr Harte, said that there was a prospect that some of the criminal matters could be heard within the next six months.

It was argued that a fade factor of about six months, between the time a person is sentenced to when they go before a judge and jury in other courts, was required.

The application to further continue the order was opposed by the DPP, represented by Seán Guerin SC.

Counsel said that there was little or no chance of the pending matters being heard within the next six months.

There was therefore no reason why the man should not now be named, counsel said. What was a “spurious”, “unfounded” and “artificial arrangement” should now be removed, counsel submitted.

Counsel said that the continuation of the order was being sought as part of an attempt by Mr Harte to continue to prevent his name from being published for quite some time.

In reply Mr Hourigan said his side “rejected out of hand” that contention.

In his ruling lifting the order, Mr Justice Meenan said that it was part of the criminal process that those convicted of offences be named, bar in certain exceptional circumstances.

Mr Harte’s case did not come under one of those exceptions, and the judge said that there was no reason to continue the order.

He said that Mr Harte could make any application he needs to the courts to have safeguards put in place to prevent him suffering any prejudice in any forthcoming trial.

Following trials before the Special Criminal Court last year, Mr Harte was convicted along with the two other men of false imprisonment and intentionally causing harm to Mr Lunney at a yard at Drumbrade, Ballinagh, Co Cavan, on September 17th, 2019.

The trial heard that Mr Lunney was abducted when driving to his home.

The court heard that Mr Lunney was dragged from his vehicle by two men before Mr Harte approached, held a Stanley knife to Mr Lunney’s face, and told him to get into the boot of a car.

Mr Harte drove with his two accomplices and took Mr Lunney to the remote farmyard where they stripped him to his boxer shorts, doused him in bleach, shattered his shin bone with two blows of a wooden bat, punched and kicked him, sliced his face with a Stanley knife and carved the letters QIH into his chest.

The men told Mr Lunney to resign from his position with QIH and end legal proceedings he was involved with in Belfast and Dublin.

Delivering the SCC’s verdict, Mr Justice Hunt said that Mr Harte was “heavily involved in these crimes before, during and after the commission thereof”.

The SCC was satisfied that Mr Harte was the driver of the car used to take Mr Lunney to the yard and that he was “responsible for inflicting most of Mr Lunney’s serious injuries”.