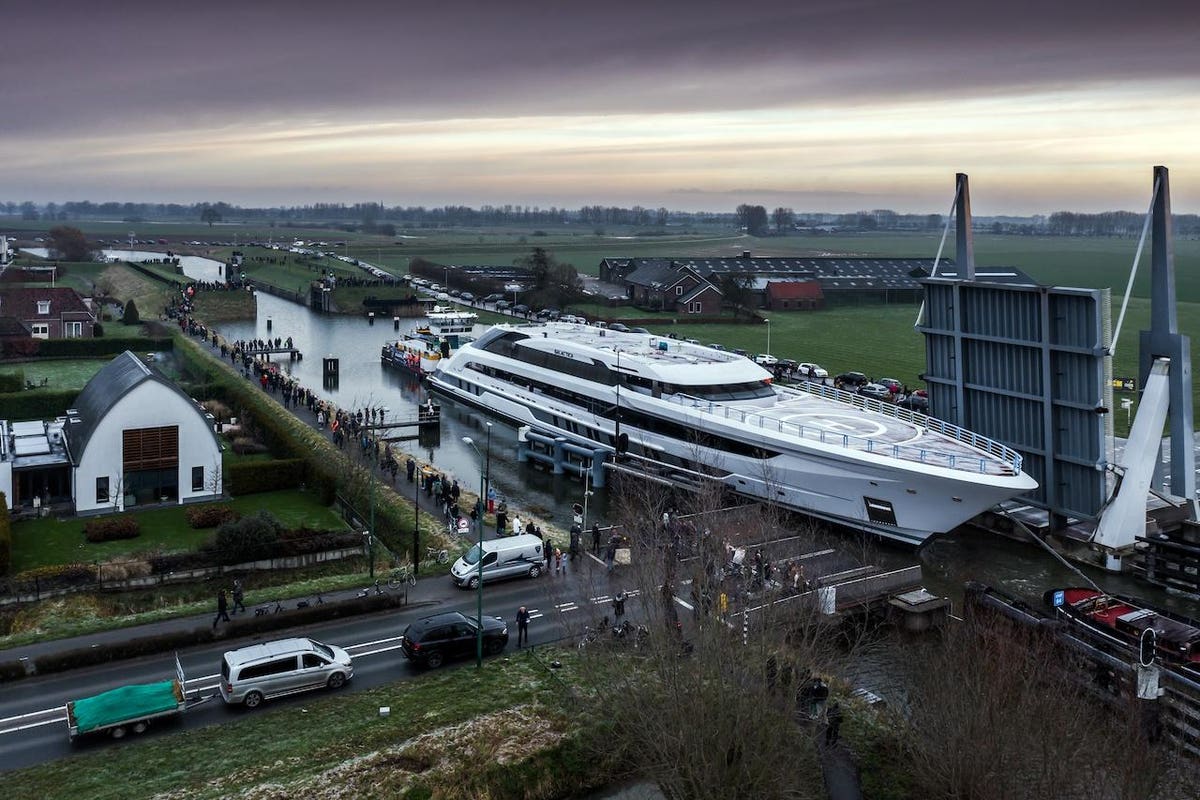 Heesen’s 265-foot-long superyacht newly named Galactica is the largest yacht the Dutch yard has ever built. It’s so large in fact, that its recent transit under a bridge on the River Maas near the shipyard drew quite a crowd of skeptical yacht watchers.

“It was quite funny,” says Heesen project coordinator Arjan Veldman. “The press and public that were watching from the river bank didn’t understand all the precise measuring operations we conducted. They thought we were just ‘trying’ to pass under the bridge and got stuck. But, for us, these operations are just business as usual. We’ve been going through locks and under bridges like this for over 40 years.


“After seeing these photos,” he adds with a smile. My family and friends are still mocking me and asking if I need a tape measure to take with me to work. Who knows, maybe as a joke we’ll create a Heesen tape measure to hand out at the next Monaco Yacht Show, where Galactica will be on display!”

Meanwhile, Galactica is also touted to have a top speed approaching 30 knots. So, instead the normal steel that the largest superyachts are built with, this new flagship is built of aluminum to provide strength to the design without adding extra weight to the overall structure.


And even though the top deck needed to be removed to get under that bridge (with mere inches to spare!), you can still see how elegant the exterior is. But that comes as no surprise since it features clean lines and the extensive use of glass comes from the British studio of Winch Design. “The Winch vision for Galactica was to retain Heesen’s sporty DNA but blend it with an innovative, futuristic spin. Curved glass forms smooth, sculpted shapes, creating a feeling of slick, contemporary charm,” said Jim Dixon, Director of Yachts and Aviation at the British design house.


“The brief stressed that she had to have a strong and unique signature whilst retaining the Heesen DNA that we all know and love,” James Russell, Winch Design Associate, Yacht Exteriors adds. “The emphasis was on creating a fast-looking yacht that sits elegantly on the water, a feat that has been cleverly achieved through the use of sculptural, curved forms and perfectly balanced proportions.”

Sinot Yacht Architecture & Design was responsible for the interior design that features a neutral color palette with splashes of blues throughout. But unfortunately, we’ll have to wait to see those photos!


Meanwhile, Heesen Yachts CEO Arthur Brouwer speaks like a proud parent when he describes watching the recent launch of the company’s newest flagship.

“Building large and complex superyachts is exciting, both from an engineering and construction perspective. We are incredibly fortunate to have the best naval architects, engineers and craftsmen in the country to build our yachts. In spite of all the challenges imposed by the pandemic, we also managed to keep the construction on schedule – which was no mean feat. This yacht is the ultimate expression of our ability to build daring projects that stretch the imagination of its engineers and craftspeople.

And its launch (clearing under that bridge with mere inches to spare!) shows just how precise Dutch engineers can be too!