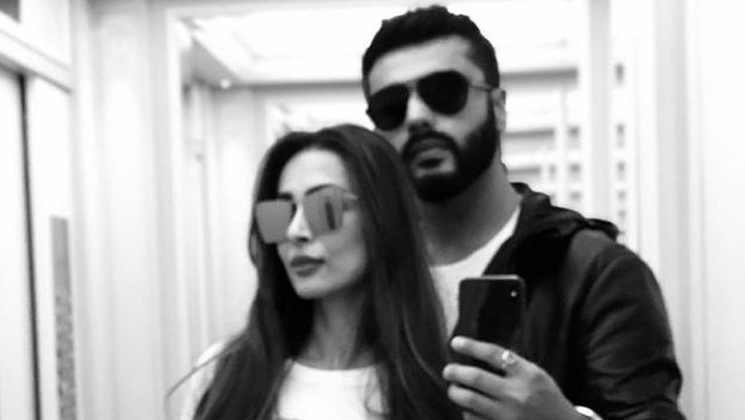 One of the power couples of Bollywood Arjun Kapoor and Malaika Arora were hitting the headlines all day today as it was reported that the couple has called it quits. Rumours are rife once again that all is not well in their paradise. However, as the breakup rumours were constantly making the noise on social media, now, Arjun Kapoor stepped up and decided to shut down all the breakup rumours with utmost swag. In the black-and-white photo, the Ishqzaade actor is seen taking a mirror selfie with Malla standing in front of him. The two oozed swag with their black sunnies on.

He took to his Instagram and dropped a classic monochrome photo with his babe Malaika while captioning it with, “Ain’t no place for shady rumours. Stay safe. Stay blessed. Wish well for people. Love y’all”. As soon as he shared the post, his Ek Villain Returns co-star Tara Sutaria commented, “YES! You guys” while Bhumi Pednekar is all heart to see them going strong.

Not just their friends, even fans of Arjun and Malaika are extremely elated to see them together in the latest post. A fan said, “Good very happy for you both @arjunkapoor & @malaikaaroraofficial” whereas another one said, “That’s how you put an end to rumours“. One more said, “Kya baat.. Happy 2 see u both again.”

This is not the first time that their breakup rumours have sparked on social media. However, earlier, they dismissed the rumours by taking a romantic vacation in the Maldives. Well, once again, Arjun refuted the rumours with sass.

Meanwhile, Arjun Kapoor is under isolation as he was tested positive for COVID-19 some days back.

Also read: Arjun Kapoor REACTS to being trolled for age gap with Malaika Arora, “Same people will be dying to take a selfie with me”