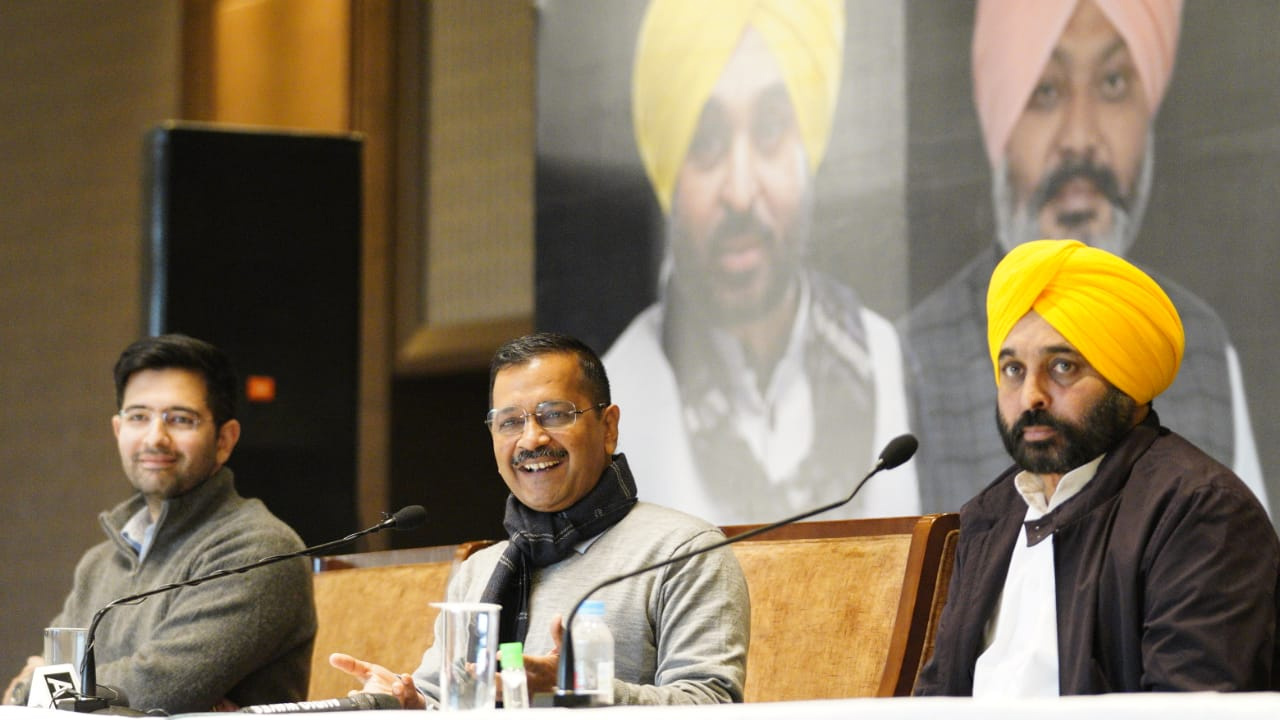 On Wednesday, Shri Arvind Kejriwal announced his 10-point Punjab model at a press conference in Mohali. He stated that based on feedback from the people of the state, we have prepared a ten-point agenda for the overall development and progress of Punjab. The agenda has fully addressed all aspects for the development of Punjab.

The issue of employment has been prioritised and made first. As per Kejriwal, due to a lack of employment, a large number of Punjabi youths are going abroad by spending lakhs of rupees. The AAP government will create ample job opportunities in Punjab and, in five years, will make the state so prosperous that even children who have gone abroad will return. He said AAP knows how to provide jobs and during the Corona period, we employed 10 lakh people in Delhi.

Kejriwal’s second goal is to make Punjab drug-free. He claimed that previous governments had ties to the drug mafia, as a result of which illegal drug trade occurred throughout Punjab and lakhs of young people got trapped into addiction. AAP will put an end to this and punish all the guilty.

The third agenda is to keep the state in peace, law and order, and brotherhood. Shri Kejriwal talked about how there were numerous instances of sacrilege in Punjab, but no one was ever prosecuted. The Punjab Police is fully capable of bringing the perpetrators to justice, but they were not given the authority to do so. The Congress-Akali leaders continued to try to save each other, taking advantage of the police and the law. The Aam Aadmi Party government will punish the perpetrators of all sacrilege cases harshly in order to restore peace and brotherhood in the state.

Goal of a corruption-free Punjab has been announced in the fourth agenda. He said that the people of Punjab are victims of commission and bribery. People are required to pay even for minor tasks. We will rid Punjab of corruption, and all work will be done for free. People will not have to make rounds of government offices in the AAP government; instead, government employees will go to people’s homes and do all of their work.

The fifth agenda item is good education, and the sixth is a good health-care system. He stated that poor people are being denied a good education and medical treatment due to the deterioration of government schools, colleges, and hospitals. The AAP government plans to renovate Punjab’s government schools and hospitals, similar to those in Delhi, and to provide free good education and medical services to the people. To improve the medical system, 16000 Pind clinics will be established in Punjab along the lines of Mohalla clinics in Delhi, and the government will guarantee treatment for every Punjabi, regardless of the cost of the treatment or operation.

The seventh agenda item is to provide free and 24-hour electricity. People will be free of power outages under the AAP government, and all families will receive free electricity up to 300 units. The eighth agenda item is critical for women’s empowerment. Kejriwal stated that in order to empower women, the Aam Aadmi Party government will provide Rs 1000 in monthly financial assistance to all women over the age of 18, allowing them to make decisions about their lives and future on their own.

The ninth agenda item is to improve agriculture and farmer prosperity in Punjab. “Punjab is an agrarian state,” he stated. The state cannot develop unless the farmers’ and farmers’ conditions improve. As a result, we will resolve any farmer-related issues that fall under the purview of the state government. Concerning matters under the control of the central government, Shri Kejriwal stated, “We will raise the problems of farmers to the best of our capacity.” We will work with farmers to find a solution and to improve the farming system.”

The tenth agenda item is about Punjab’s industry and trade. Shri Kejriwal stated that in order to promote trade-industry, we will completely eliminate Raid Raj, Inspector Raj, and corruption from Punjab and create a business-friendly environment. With a rise in industry-trade, employment will automatically increase, and youth unemployment in Punjab will be eliminated.

Shri Kejriwal warned the people of Punjab to be wary of traditional parties’ gimmicks, saying, “All the parties have regrouped to defeat Punjab.” Their goal is to defeat the Aam Aadmi Party in any way possible. However, this time in Punjab the people will not let them succeed. He claimed that the Akali Dal and the Congress had ruled Punjab in collaboration for 45 years, dating back to the state’s formation in 1966. They looted Punjab together and used its resources on their own terms. It was all done for monetary gains. This time, the people of Punjab have a chance to make a difference. In this election, the people of Punjab have decided to bulldoze these two parties and give the Aam Aadmi Party a chance.