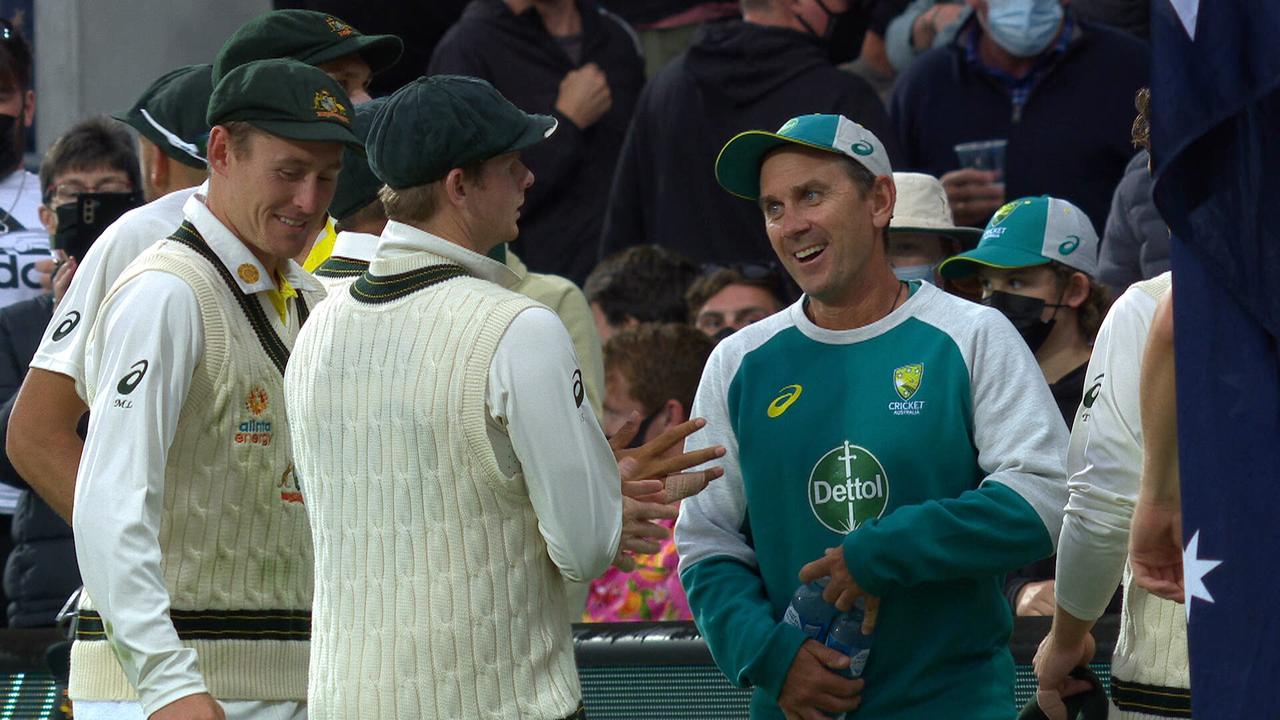 At tea on Sunday, England were sitting at 1-68 with a genuine chance to shock Australia by winning the fifth Ashes Test.

And yet, as the players prepared to take to the field, coach Justin Langer — criticised earlier in the year for being too intense and uptight — was seen having a laugh with his team.

They were scenes you never would have seen 12 months prior.

What followed over the next two hours was astonishing as the calm Aussies decimated the English attack to complete a resounding win and finish the series 4-0.

Langer has been scrutinised for his intense coaching style but his new approach seems to be one that was well adopted by the side during this series.

After the win, captain Pat Cummins’ was asked on Fox Cricket about the importance of remaining calm in the dressing rooms.

While he did not mention Langer in his response, his comments were telling.

“I think that’s not only when I play my best but I think that’s when the team plays at its best. Everyone wants it, everyone is up for it, energetic,” Cummins said to Fox Cricket.

“So I think staying calm at times, even at the tea break then when England had a really good opening partnership.

“I just really love how composed and calm everyone stayed and just focused on the job. I think this series really demonstrated that everyone is at their best when they’re thinking like that.”

The change could signal a shift in thinking about Langer’s position.

After Australia’s tour of Pakistan, the former Test opener comes off contract and there has been a wave of speculation around whether he will be offered a new deal or asked to give up one format.

Langer’s resume as Australian coach is one to behold, including dragging the side out of the Cape Town saga which saw two key players banned from Test cricket.

He then went on to win the T20 World Cup last year and now has delivered a demolition job of England on Australian soil to retain the Ashes.

The attitude surrounding Langer’s position seems to have shifted and could already be seen after day two of the Hobart Test.

“He’s been really great through the World Cup and the Ashes. Honestly, it’s not been a talking point at all within the camp.

“The plan has always been to chat about it after the Ashes, so the powers that be, I’m sure, will chat at some stage.

“But he’s been fantastic for us and the boys love having him around.”

Despite the recent success there have been calls for Langer to step down, including from former teammate Darren Lehmann who led the team for five years.

“I just don’t know in this day and age whether you can do all three formats physically or mentally for an extended period of time,” Lehmann said to foxsports.com.au.

“I think he had to do it to start with and he’s done so well. Now, if I’m him, I’m saying I’ve won all I need to win and do I really need to do it all?

“Knowing Justin, he won’t want to step aside. But he should or he will burn out.

“If I was him I’d walk away actually. Four years, out on a high. Perfect.

“I coached for a year too long and in that moment I didn’t realise it. I think four years is a perfect tenure. Hindsight is a wonderful thing.

“He could coach one format but all three is a lot to take on… JL knows my thoughts on that. I’ve spoken to him about it.”

It will be seen in the next few months if Langer continues as Australian coach, with some calling for separate white and red ball leaders.

Despite the scrutiny, Langer has put his best foot forward to remain in the role.