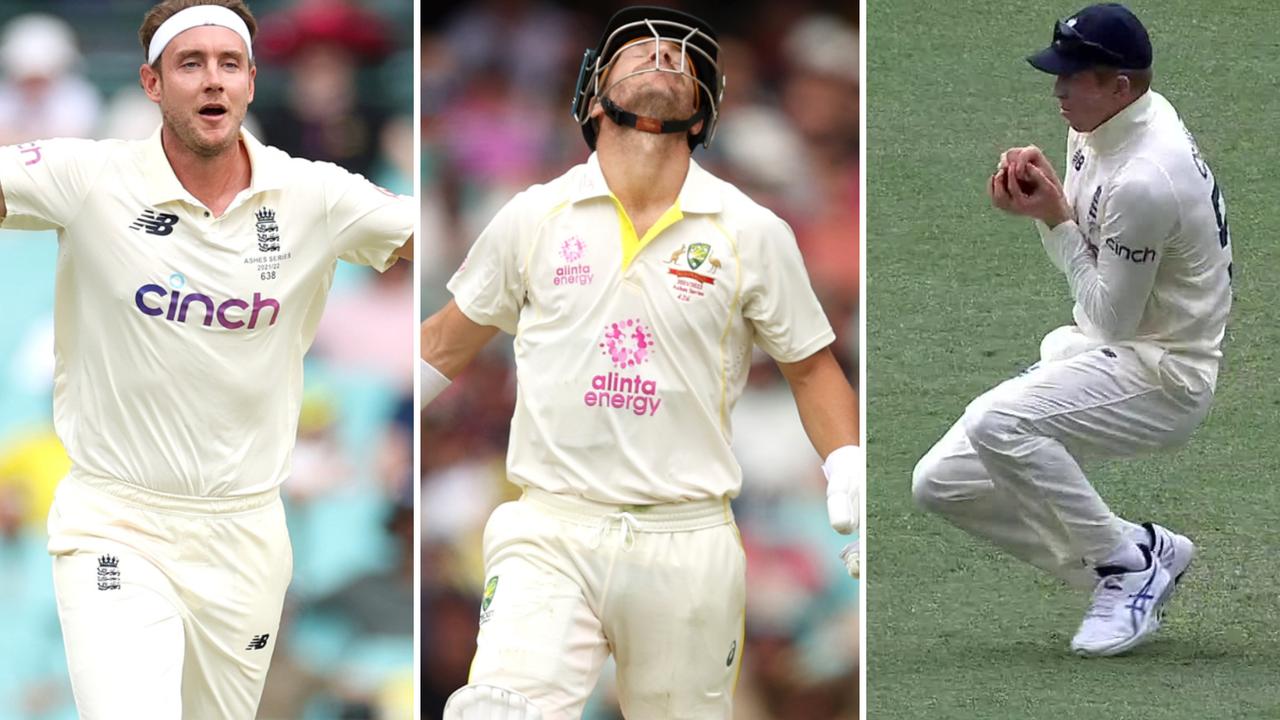 Stuart Broad has struck in the fourth Test to remove David Warner, further shining the spotlight on England’s selections during the Ashes.

Broad was left out of the England side for the first Test at the Gabba despite his incredible record against the Australian opener.

After a strong start, in which Australia posted a 50-run opening partnership, Broad stepped up, luring Warner into a false shot to be out caught in the slips for 30.

It was the 13th time Broad has snared Warner in Tests.

It prompted an exasperated Michael Vaughan to declare of Broad: “Where were you in Brisbane?”.

“We should have seen this three weeks ago,” he said on Fox Cricket’s coverage.

It followed a frustrating opening to the Test with rain regularly delaying play.

Australia is 1-56 after 21.4 overs with play suspended for a fourth time on day one.

As of 3.10pm, the covers were still on and a re-start time yet to be determined.

‘BE CAREFUL WHAT YOU WISH FOR’: Ashes greats shocked by Langer-CA stand-off

‘WIN FOR THE AGES’: Test minnows shock the world in stunning upset

Australia made a catious start before a 40-minute delay after just 4.3 overs.

During the little play that was achieved in the first session, former England captain Michael Vaughan accused the bowlers of returning to a length that was too short.

“This is already a bit of deja vu,” he said. “It’s too consistently short of a good length.

“It really is the kind of morning you do just have to offer the half volley and if you (concede) 20 runs in the session more than you would have if you bowled short of that, then fine.

“But you might create more chances. You can play the negative or defensive game later on in the day.”

After 8.5 overs, Fox Cricket stats showed that only one ball was going on to hit the stumps.

In response, Vaughan said: “For a senior pair of (Stuart) Broad and (James) Anderson you’d have to say that’s not quite good enough.”

Kerry O’Keeffe offered a similar analysis during the rain delay, saying: “I think the best ball this morning is the half-volley. You’ve got to risk the front-foot drive.

“Harris isn’t a noted driver down the ground, Warner likes to go square. Bowl it really full and try and hit the string.”

He added: “They’ve bowled a length that may compromise him (Warner) when he’s back inside the popping crease. But he’s not, he’s well forward of that. They’ve got to err on the full side, and they haven’t done yet. They’re lessons hard learned, aren’t they?”

NEW PODCAST – ‘A contest would be nice’: Ultimate SCG Test preview OR SUBSCRIBE IN ITUNES OR SPOTIFY

During the day’s first rain delay, Shane Warne through his support behind Mitchell Marsh, saying he believes he should have been selected at No.5 over Usman Khawaja.

Khawaja replaces Travis Head but Warne believes the time was right to give Marsh a go as a specialist batter following his brilliant form in 2021.

“Australia has been waiting a long time for Mitchell Marsh to come good .. and right at the moment he’s in the form of his life,” Warne said on Fox Cricket. “So I hope the selectors didn’t categorise Mitchell Marsh as an all-rounder. Yes, he is, but he could still play as a batsman.

“Khawaja deserves his chance, don’t get me wrong, I’m not having a go. But we’ve been waiting a long time for Marsh to come good and what a time now to say ‘have you got it at this level? You’re going to be tested against Broad and Anderson, let’s see what you’ve got in this form’.

Earlier, Warne predicted an England resurgence when they face a red hot Australian side in the fourth Test at The Sydney Cricket Ground as rain threatens to derail the hosts’ push for a 5-0 series win.

Australia are riding high on confidence after wrapping up the series in just 12 days over the first three Tests and will back themselves to win the final two pending the weather.

However while the forecast looks shaky for the Sydney Test, Warne believes England will give a much better account of themselves.

“I expect England to fight back in Sydney, I have a feeling they’re going to fight back,” Warne told Foxsports.com.au.

“It’s not going to be easy, but I think they will.”

“I think Zak Crawley will get a big score,” Warne said.

“I just think there’s something about Zak Crawley as a player. I think he’s a good young player. I’m locking him in for a big score in Sydney.

“I think Joe Root will get his first hundred in Australia and I think we’re going to see the best of Ben Stokes and Jos Buttler as well.”

‘NO PART OF ME UNDERSTANDS’: Warne stunned by Broad call amid tension in England camp

‘THAT WILL BE HIS BIG OPPORTUNITY’: Cummins drops big hint over snubbed star’s future

SELECTION: This Test re-call could be Khawaja’s last. What happens next may define a legacy

Warne dismissed the notion the final two Tests lacked meaning due to the series already being decided and believes England will have plenty to play for.

“This is Ashes cricket so there’s no such thing as a dead rubber. There’s careers at stake. There’s reputations at stake.

“There’s just so much at stake that England – I’ve just got a feeling they’re going to really fight this Test match.”

Warne believes the first session and day one will be crucial to the tourists’ chances of getting some respectability back in the series and implored them to show aggression from ball one.

“They have not won a day one this series,” Warne said.

“After day one they’ve been behind the eight ball every time and needing to play unbelievable cricket or do something really special to get back into the game. And you can’t keep doing something special every time.

“Obviously it’s a lot harder to do that when you’re behind the eight ball. But they still have to try, from ball one they have to be aggressive.”

HOW HEAD CAN PLAY IN SYDNEY

There exists a possibility where Travis Head could be wearing his baggy green and playing at the SCG, despite currently being stuck in isolation after testing positive for Covid in Melbourne.

In a point first raised by The Herald, Head is due to leave isolation — pending a negative PCR test — on Thursday after a seven-day stint.

That would then leave Cricket Australia with a decision to make as to whether Head can rejoin the team’s Ashes bubble and be available as a Covid or concussion substitute.

Considering Head is facing an earliest exit of Thursday, Friday’s Day 3 would likely be the South Australian’s first day of availability if CA was to go down that path, and a like-for-like replacement was needed.

Either way, Head is expected to jump straight back into the XI for the fifth Test in Hobart.