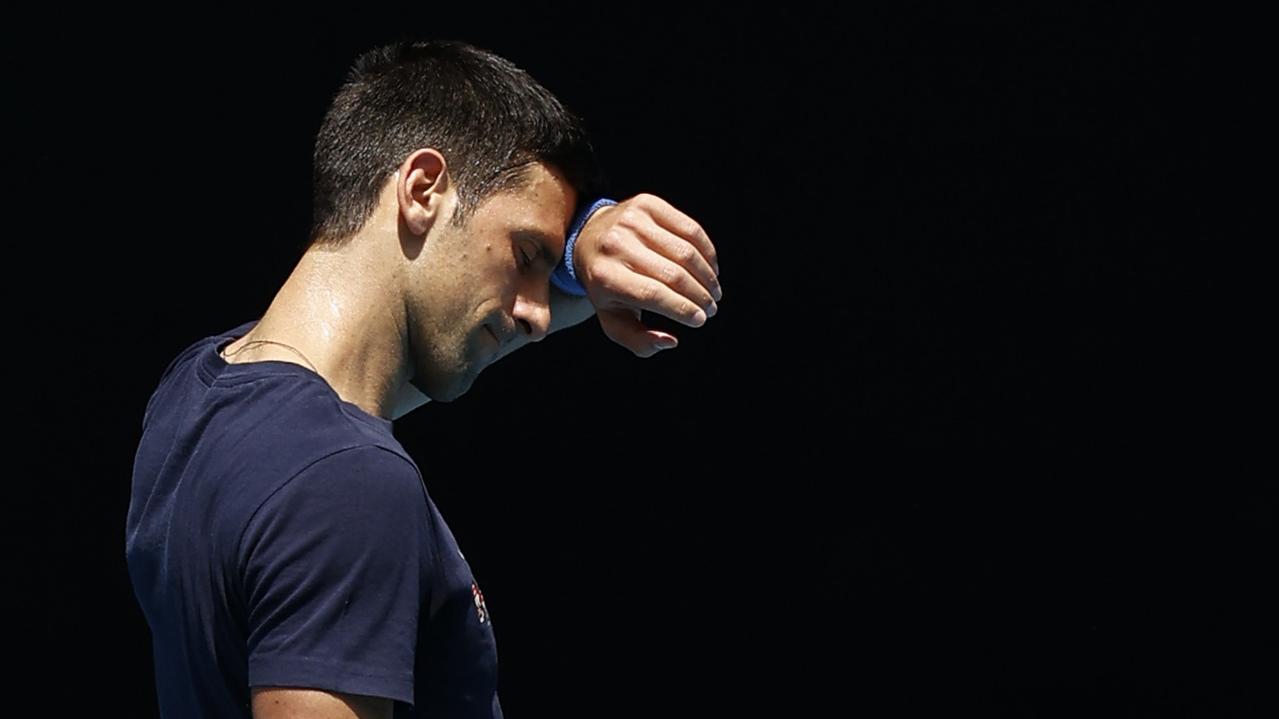 Novak Djokovic was included in the Australian Open draw — despite a dramatic delay — on Thursday but his participation remains in serious doubt as the men’s field stands to be blown open if his visa is cancelled again.

World No.1 Djokovic was drawn to face countryman and Davis Cup teammate Miomir Kecmanovic in round one, in what could be considered the friendliest possible draw given the hostile treatment that is likely to greet him in Melbourne.

Djokovic remains in the field as the men’s No.1 as it stands, but his participation is far from guaranteed amid speculation his visa could again be cancelled by the Australian government, as early as Thursday.

LATEST: Novak’s hopes ‘weakening by the day’ amid reports he’ll be ‘booted’

There was high drama as the draw, scheduled to begin at 3pm AEDT was delayed “at short notice”, with no explanation yet as to why from organisers, prompting speculation an announcement could be imminent.

However Prime Minister Scott Morrison refused to comment on the issue at a press conference, with reports suggesting a decision had still not been made, with the rescheduled draw conducted a short time later.

Aussie Ash Barty is again the No.1 seed in the women’s tournament and received a favourable first round draw as she bids to become the first local to win an Australian Open singles title since Chris O’Neil in 1978 – drawn against a qualifier. However she could meet returning big gun Naomi Osaka in the fourth round and the dangerous Maria Sakkari in the quarter-finals.

Aussie young gun Storm Sanders will face No.2 seed Aryna Sabalenka in round one in what could be considered a daunting draw, but it may also be a huge opportunity with Sabalenka alarmingly out of form since arriving Down Under.

Nick Kyrgios, whose participation in the tournament remains under a cloud after he contracted Covid, faces the nightmare — but blockbuster proposition — of meeting world No.2 Daniil Medvedev in the second round.

LATEST: Novak’s hopes ‘weakening by the day’ amid reports he’ll be ‘booted’

The scenarios for the draw, depending on how the Djokovic situation plays out, are fascinating. He may yet be deported by the federal government for breaching border rules, or be permitted to stay in the country and play for his 10th Australian Open title.

If he stays and plays, he’ll be the tournament favourite – perhaps powered by spite.

However if Djokovic’s visa is revoked in the coming days it will force changes to the draw which will shake up the paths for many.

If the Serb withdraws, or is forcibly withdrawn via deportation, from the Australian Open after the draw is held, the No.5 seed (Andrey Rublev) will take his spot in the bracket.

However if Djokovic withdraws after the first day’s order of play is released – which could be as soon as Friday – he would be replaced by a Lucky Loser (one of the highest-ranked losers from the final round of qualifying).

Therefore if Djokovic is still in Australia this weekend, but ends up being forced to leave before Monday, it will completely open up the top section of the draw.

Should Djokovic get to play there are some big names awaiting him on the path to the final. he coulld meet Italian seventh seed Mario Berrettini in the quarter-finals, then possibly Alexander Zverev and 20-time slam champion Rafael Nadal.

Australia’s only seeded male, No.32 Alex de Minaur, has a dangerous draw and must face gun Italian teen Lorenzo Musetti in the first round.

‘THROW HIM OUT OF TENNIS’: US radio icon unloads on ‘a***hole’ Novak

WILL HE STAY OR GO?: Australian Gov ‘still preparing’ to deport Djokovic

AUS OPEN ULTIMATE GUIDE: Everything you need to know

RE-LIVE (if the blog does not appear, click here)