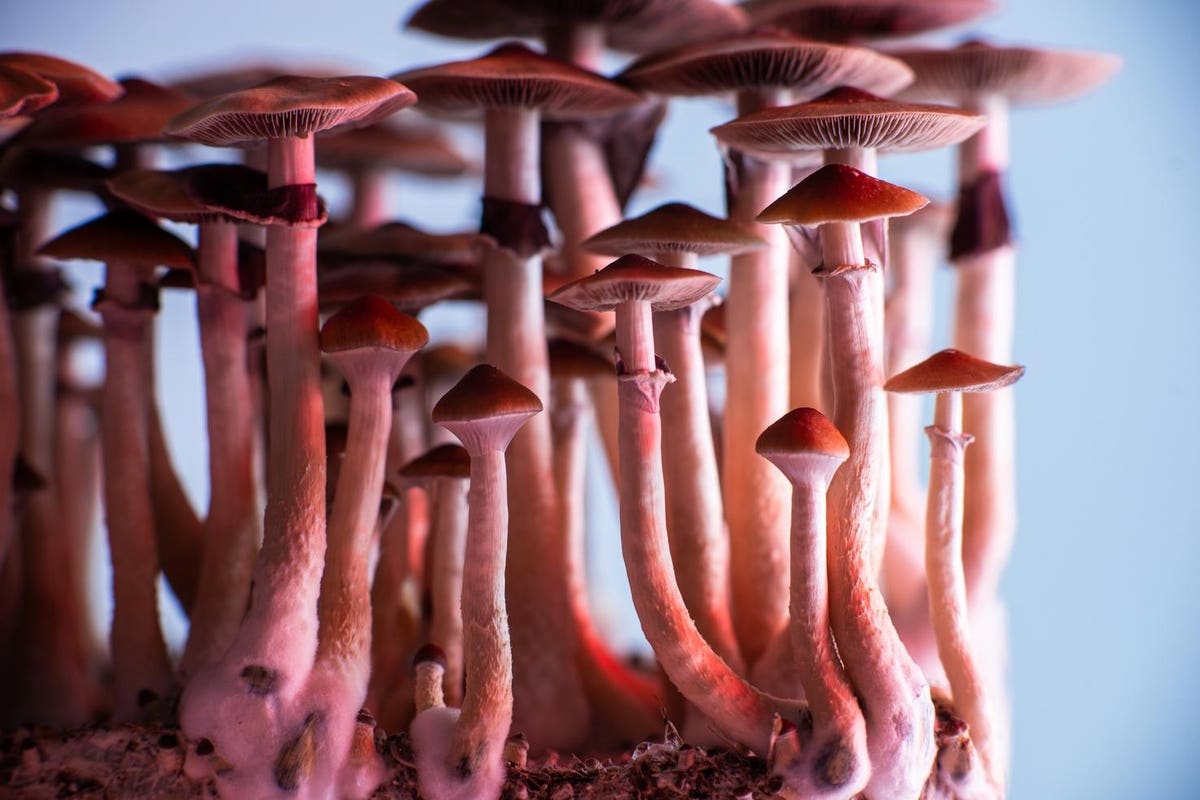 Welcome to Dry January, the month many stop drinking alcohol to give their bodies a rest from toxic compounds consumed en masse over the holidays. If you’re in recovery or, like me, practicing a lifestyle that favors cannabis and psychedelics over alcohol and harder substances, also known as “Cali sober,” every month may be dry for you. For those new to this term, drug and culture journalist Mary Carreon sums up the Cali sober concept eloquently.

Mary says it’s easy to get caught up in the trendiness of Cali sober, noting the phrase sounds like “designer sorbet rich people buy at Erewhon.” She recognizes that celebrities talk about it, radio stations “like KIIS FM” air songs about it, and we’ve seen the concept swirling around the media landscape a few times. But, she believes the root of why people are fascinated by the Cali sober lifestyle is because “it honors nuance and flexibility, and flips the concept of abstinence on its head, reducing the idea of abstinence to nothing more than a theory.” She shares that the perspective shift alone “can help people reclaim their autonomy and independence, two things that are often stripped from people who go through recovery.”

Mary finds that Cali sober as a trend is annoying, “but making it a practice — like meditation or mindfulness or exercising — can help people repossess their power, which is critical when making lifestyle shifts away from substances or habits or friends (or all of the above) that don’t contribute to making you the best version of yourself.” And, she acknowledges that being Cali sober isn’t for everyone (see Demi Lovato’s recent change of heart), noting that “sometimes abstinence is the most empowering path to becoming your optimal self… it doesn’t matter what road you take because the end goal is doing whatever is ideal for your longevity, and that should be the number one priority.” Agreed. In the end, it’s about saving lives.

Cali sober is trending in pop culture alongside Dry January, so today I’m providing a platform for six accomplished thought leaders in cannabis and psychedelics to share insights and strategies on Cali sober for inspiration on staying balanced year round — Christina DiPaci is the CEO of one of the largest independent craft cannabis farms in California; Zeus Tipado is not only a neuroscientist but also the creator of Stonedgamer and MiddleEasy; David Bienenstock is a popular podcaster and author of How to Smoke Pot (Properly): A Highbrow Guide to Getting High; Shelby Hartman has created a media company and education platform at the forefront of the rapidly growing psychedelic movement; Payton Nyquest’s company combines the latest advances in psychedelic medicine with evidence-based care and a holistic, integrated approach; and Mary Carreon is an award-winning journalist, editor, podcaster, and copywriter who’s written for Snoop Dogg’s Merry Jane, Billboard, DoubleBlind, the LAnd, and more.

“I am in full support of conscious, intentional drug consumption. Cannabis can be a wonderful alternative to alcohol, (did I mention without the hangover?!), but we have to be careful not to have elitism in our preferred drug use. Do what works for you and don’t judge other people’s drug use! Check out Dr. Carl Hart’s Drug Use for Grown-Ups: Chasing Liberty in the Land of Fear. A scientist and a professor of psychology specializing in neuroscience at Columbia University who’s known for his work on drug abuse and addiction, Dr. Carl Hart presents a powerful argument for how adults can use substances and live a happy and meaningful life.”

“I’ve seen all the altered states that alcohol has in store for me, and it doesn’t appeal to me anymore. With cannabis and psychedelics, I can have my entire perception and its fundamental constructs completely altered, and the next day I’m perfectly fine with no hangover. That’s appealing to me — I can’t throttle my subjective experience in that way with alcohol. As far as the physiological effects of alcohol — I don’t really vibe with it. At the beginning of the pandemic, my best friend died of alcohol poisoning. He was the closest person on this planet that I would have called a brother. Dead, from a drink you can buy at a grocery store. A product advertised across the world in Superbowl commercials. His struggle with alcohol (and the constant struggle of other friends) is one of the reasons I also remain Cali sober. It’s not my place to dictate which lifestyles people should adopt. The Cali sober lifestyle works for me because alcohol no longer holds priority in my entertainment and leisure. Fortunately in California, the environment is slowly adapting to the Cali Sober lifestyle. Alcohol-free, cannabis-infused beers are popping up. Cannabis smoke lounges are also appearing, unfortunately at a staggeringly slow rate due to city burearcy — which brings up my next point. The only force preventing the full adoption of the Cali sober lifestyle is the government of California itself. Perhaps the state of California is against the Cali sober lifestyle.”

“When Abdullah Saeed and I had David Crosby as a guest on our podcast, we realized that he’s been ‘California sober’ for many years without ever being aware of the term. And while he personally finds the word sober a bit misleading in this context, he also confirmed that going California sober has worked for him. After famously struggling with drugs like cocaine and heroin, Crosby was first completely abstinent from all intoxicants including cannabis for more than a decade before successfully reintegrating cannabis back into his life. This is a complex issue, and it’s important to keep a focus on individualist care and not one-size-fits-all solutions, but David Crosby is just one example of many people I’ve encountered through my reporting and advocacy work who are pursuing this path with success.”

“There is hardly any rigorous research looking at microdosing psychedelics, or taking small amounts of psychedelics. But, much like we had in cannabis before recreational legalization, we do have thousands and thousands of people saying it has changed their lives. One of the reasons is that when people microdose LSD and psilocybin they often report that they just want to make the healthier decision, the decision that is more aligned with their body’s needs. Dr. James Fadiman, microdosing pioneer, often says that when people microdose they just “want the salad.” I’ve experienced this myself. It’s hard to explain, but on days when I microdose psilocybin, I often find myself habitually reaching for the unhealthy snack or glass of wine and then finding that I genuinely don’t want it. That’s the magic of Cali sober, I think. Not that it’s a cop out for people who can’t actually be sober, but that cannabis and psychedelics, in this context, are seen as supportive medicines that help people make the right choices for themselves.”

“For personal health reasons, I’ve never been a heavy drinker to start with, and I’ve reduced my consumption over the years as I tried various therapies and wellness practices. I’ve consistently found that abstinence helps me maintain clarity of mind and keeps me grounded emotionally and spiritually. Today, I’m very happy with a lifestyle that lets me be present as a father, husband and business leader, and to make conscious choices. Integrating regular therapy, including the responsible use of psychedelics, has been a key component in my health journey. I see a similar societal shift happening – I’m not surprised by the move away from alcohol consumption. At Numinus, we believe that psychedelic-assisted psychotherapy (PAP) is transformative and a core part of this shift. We know current healthcare isn’t equipped to handle climbing global rates of mental illness, addiction, and trauma. Ongoing studies show the benefit of PAP in treating many conditions, including substance use disorder, which could include alcohol abuse. In PAP, trained psychedelic therapists help patients by combining traditional psychotherapy with psychedelic medicine, making both components equally critical. It is a trauma-informed practice, meaning patients work through past experiences or traumas in a safe therapeutic container and integrate that learning into everyday life. Through this treatment, we aim to help our patients make more informed choices and build sustainable lifestyle habits.”

“Abstinence doesn’t work for me. Rigid frameworks have never worked for me. My personality is too indulgent and I love party environments. I’m not exaggerating when I say I live for wild, adventurous times with my crew of close friends. I’ve always been this way! But my life moves too fast and too much is on the line now to be hungover (from anything), which is why I regularly replace alcohol with mini-doses of mushrooms when I go out. They never make me feel hungover, and they give me a way to let loose and still have a good time without getting drunk. I’m a better human on mushrooms (and cannabis or other psychedelics) than alcohol, even though I think most people would classify me as a “happy drunk.” I’m just more conscious and available, I don’t forget what I’m saying half way through a sentence, and I’m more willing to connect with others and maintain all boundaries. To be clear, I’m not Cali sober right now. I went wine tasting last week and drank a hard kombucha last night. I also foresee more wine nights during holidays. Cali sober is something I oscillate to and from for periods of time for my mental, emotional, and spiritual health. And even during the phases when I’m not Cali sober, it still provides a framework for responsible partying, which has been my undying ethos for over a decade. Drugs don’t have to consume you. They don’t make you a bad person, nor do they make you incapable of achieving the highest success. As Dr. Carl Hart says, “using drugs can help us in our pursuit of happiness.” When done responsibly, drugs can actually help us be the best versions of ourselves.”