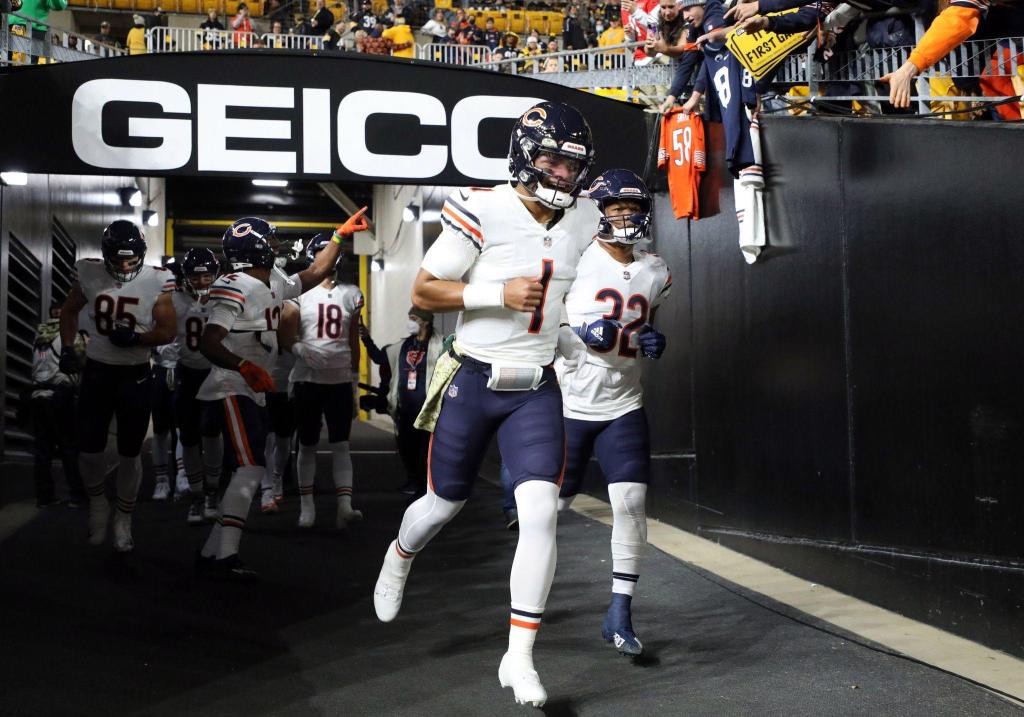 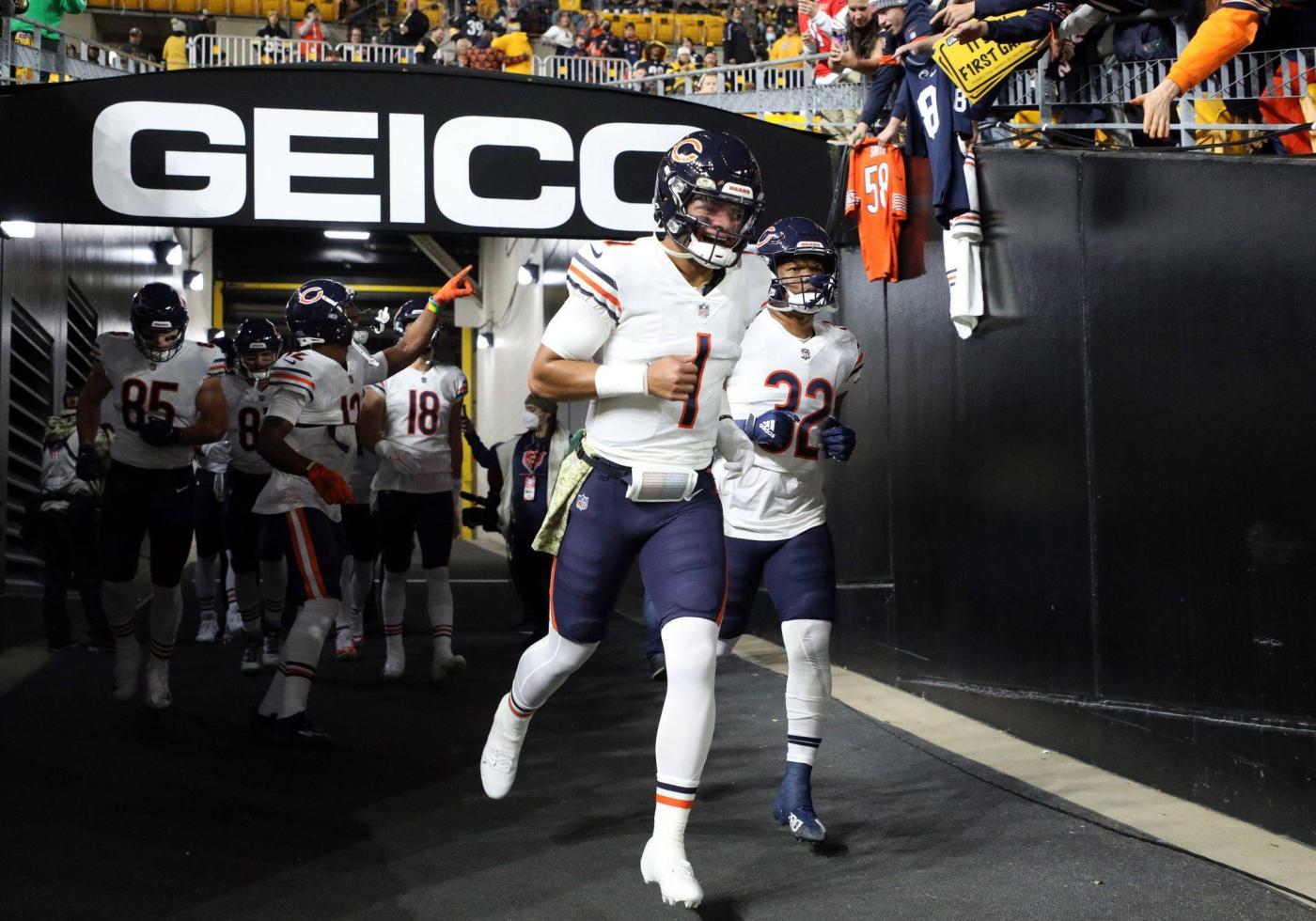 Quarterback Andy Dalton will make his first start in nearly a month in the Chicago Bears’ home finale against the New York Giants.

Dalton hasn’t played since a 33-22 loss to the Arizona Cardinals on Dec. 5. He broke a bone in his non-throwing hand in that loss, had a hip flexor strain during his recovery and tested positive for COVID-19 — all in the last month.

We’ve got the latest Week 17 updates from Soldier Field.

The Bears defense had two takeaways in the first four minutes of Sunday’s game against the Giants at Soldier Field to fuel a 22-3 halftime lead.

Outside linebacker Trevis Gipson had a strip-sack of Giants quarterback Mike Glennon. Bilal Nichols scooped the football up and returned it 12 yards to the 2-yard line.

On the Bears first offensive play, David Montgomery scored on a 2-yard run.

On the Giants’ next drive, Glennon threw a pass to Kenny Golladay that Artie Burns broke up and Tashaun Gipson intercepted. Gipson returned it 31 yards to the Giants’ 24-yard line. On fourth-and-2, Andy Dalton hit Darnell Mooney with a 4-yard touchdown pass for a 14-0 lead.

Bears outside linebacker Robert Quinn, who is trying to break Richard Dent’s franchise record of 17 1/2 sacks in a season, didn’t get many opportunities.

Glennon completed just 1 of 2 passes for 4 yards and was sacked twice, the other by defensive lineman Angelo Blackson.

Quinn was taking Glennon down on third-and-7 late in the first quarter when Glennon avoided the sack by completing a shovel pass to Devontae Booker for a 4-yard gain.

Giants kicker Graham Gano made a 38-yard field goal with 7:45 to play in the second quarter to cut the Bears’ lead to 14-3.

Bears kicker Cairo Santos added a 21-yard field goal with 1:01 to play in the half to make it 17-3. His kick came after Andy Dalton threw incomplete twice in the end zone, on first-and-goal from the 10 and third-and-goal from the 4.

The Bears defense came up big after the Giants thought Santos’ ensuing kickoff was going into the end zone. It instead bounced down at the 2 before Pharoh Cooper picked it up and returned it to the 5.

Booker was stopped for a loss of 3 yards to open the drive, and Derrick Kelly was called for a false start to push the Giants to the 1. Blackson then took down Booker in the end zone for a safety.

Santos made a 44-yard field goal as time expired in the half to make it 22-3.

Mooney was removed from the game by officials for medical reasons late in the second quarter.

Defensive lineman Akiem Hicks is active for the Bears after he came off the reserve/COVID-19 list Friday and was listed as questionable to play.

Bears wide receiver Allen Robinson will play after he said he lost about 10 pounds while battling COVID-19. He returned to practices Wednesday.

And nose tackle Eddie Goldman (finger) and left tackle Jason Peters (ankle) are also active after they were listed as questionable.

But Bears quarterback Justin Fields is inactive as he continues his recovery from an ankle injury. Bears coach Matt Nagy said Friday Andy Dalton would start and Nick Foles would be the backup, but he left open the possibility Fields would be active.

Now Fields will look to potentially making his final appearance of the season in the Week 18 game against the Minnesota Vikings, if he recovers in time.

Andy Dalton, who is nearing the end of his one-year contract with the Bears, will try to lead the Bears to their first back-to-back wins since Oct. 3 and 10. Rookie quarterback Justin Fields continues to recover from an ankle injury and is listed as questionable. Nick Foles, who led the Bears to a comeback victory over the Seattle Seahawks last week, will back up Dalton.

“It’s kind of been a crazy month for me,” Dalton said. “But I feel good about where I’m at now and my body feels healthy. And so I’m happy to be where I’m at now rather than where I was a few weeks ago.”

The Giants have lost four straight without quarterback Daniel Jones, who has a neck injury. They could use former Bears quarterback Mike Glennon and Jake Fromm in the game.

Both the Bears and the Giants have been eliminated from playoff contention, but the game could have significant meaning for one Bears player. Outside linebacker Robert Quinn will try to break the Bears’ single-season sacks record of 17 1/2 set by Richard Dent in 1984. Quinn has 17 on the season.

Miss anything this week? Catch up before today’s kickoff (noon, CBS).