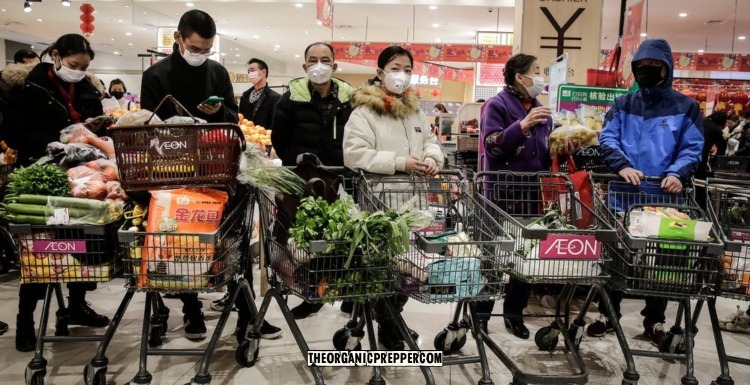 The author of The Faithful Prepper and  Zombie Choices

In a rather shocking turn of events, China has instructed its citizens to begin stockpiling food for what it deems to be a difficult winter.

The Economic Daily, controlled by the Chinese Communist party’s Central Committee, urged readers not to be alarmed by the ministry’s advice but also noted that many households had been caught up in Covid lockdowns without adequate supplies of rice and vegetables. (source)

It was back in September 2021 that China ordered the top state-owned energy companies to begin to secure supplies for Winter 2021 at “all costs”. They also urged citizens to stock up on food. (source)

Currently, China is experiencing an energy crisis as they are unable to get enough coal into the country to keep the lights on within many cities. As a result, there is a severe electricity shortage throughout the nation. [source:

And now, as of November 1, China is telling its citizens that they need to stockpile food ahead of Winter 2021.

It all started with a post by the Ministry of Commerce.

This came about from a social media post by China’s Ministry of Commerce. Behind the Great Fire Wall, China has its own series of state-monitored social media platforms, one of which is Weibo. This is in essence a version of Twitter, and it was here that the Ministry of Commerce posted that it was encouraging households to stockpile daily necessities in case of emergencies. [source:] H

In specific, the post stated, “Families are encouraged to store a certain amount of daily necessities to meet the needs of daily life and emergencies.”

In response, it is reported that local supermarkets were flooded with patrons, with one Weibo user posting, “As soon as this news came out, all the old people near me went crazy panic buying in the supermarket.”

In turn, the Chinese newspaper The Economic Daily told readers to not have “too much of an overactive imagination” when it came to interpreting the nation’s instructions to begin stockpiling food for Winter 2021. It went on to state this warning was due to the potential of incoming lockdowns. [source ]

But there really are food shortages in China.

It does appear as if food shortages are affecting even China at the moment, however.

In early October severe cold weather, floods, and a tornado damaged crops throughout Shandong, the largest vegetable growing region throughout China. By the end of that same month, the prices of broccoli, cucumbers, and spinach had doubled. [source]

Such prices caused another Weibo user to say, “I thought I had a hearing problem” when notified about the current Chinese price on tomatoes at the local grocery store.

Local governments were then instructed to purchase vegetables and stockpile them in state-owned freezers as Beijing plans to release vegetable reserves “at an appropriate time” to prevent massive inflationary prices hitting grocery store shelves.

Is there something more insidious than the weather and the pandemic behind this?

Is there possibly something more insidious than bad weather and a virus behind these shortages and warnings? Something big enough to affect us here in the US?

All of these recent happenings, when combined with this Weibo post caused a slurry of speculating to begin within China and the online community as the world wonders whether or not this is China’s attempt to ready its citizens for an invasion of Taiwan.

This comes in the wake of increased Chinese aggression against Taiwan within the past 11 months as China has recently sent its largest number of fighter jets, bombers, and anti-submarine aircraft into Taiwanese air space just a month ago on October 2.

In response, Taiwan mobilized its missile defense systems and scrambled fighter jets of their own to warn away the Chinese fighting aircraft. [source ]

China has also stated of late that “World War III could be triggered at any time” over the nation of Taiwan.

As expected, Taiwan has stated, “If China is going to launch a war against Taiwan we will fight to the end, and that is our commitment.” These words came from Taiwanese Foreign Minister Joseph Wu, who went on to say, “The defense of Taiwan is in our own hands, and we are absolutely committed to that. I’m sure that if China is going to launch an attack against Taiwan, I think they are going to suffer tremendously as well.” [source ]

In an attempt to calm some of this speculation, Zhu Xiaoliang of the communist Ministry of Commerce told the Chinese people that this was most certainly not due to any imminent threat to the food supply as “all regions have adequate supply of daily necessities, the supply should be completely guaranteed.”

Whatever the reasons may be – whether the Communists have something in mind or the creators of The Great Leap Forward have suddenly decided that they now care about humanity – if China is urging its people to stockpile food for the coming winter, it’s likely a good idea for the rest of the world to pay heed as well.

We should also take heed.

Keep in mind that billions of dollars worth of our own food supply comes from China. If they’re warning their own people about shortages, do you think they’re still going to ship over tons of food to us?

As you can see, the food supply issue is global and not just an American problem. Go here to get our FREE QuickStart Guide to building a 3-layer pantry full of foods your family will love.

Get your food storage in order and study up on the facets of prepping that you’re soft on by using promo code ‘TATE’ to get a discount on The Organic Prepper ebooks and courses. Make sure you have the necessities put away to keep your family warm, fed, and safe this coming winter, and stay frosty, my friends. Focus on shortening your supply chain and building self-reliant skills. We certainly shouldn’t expect our former supply chain to return to its former abundance any time soon.

Do you feel that Chinese food shortages will affect us?

We’re already seeing major supply chain disruptions. Will China’s shortages be another nail in our food supply coffin? What are your thoughts about this turn of events? Let’s discuss it in the comments.

Aden Tate has a master’s in public health and is a regular contributor to TheOrganicPrepper.com, TheFrugalite.com, PewPewTactical.com, SurvivalBlog.com, SHTFBlog.com, ApartmentPrepper.com, HomesteadAndPrepper.com, and PrepperPress.com. Along with being a freelance writer, he also works part-time as a locksmith. Aden has an LLC for his micro-farm where he raises dairy goats, a pig, honeybees, meat chickens, laying chickens, tomatoes, mushrooms, and greens. Aden has two published books, The Faithful Prepper and Zombie Choices. You can find his podcast The Last American on Preppers’ Broadcasting Network.