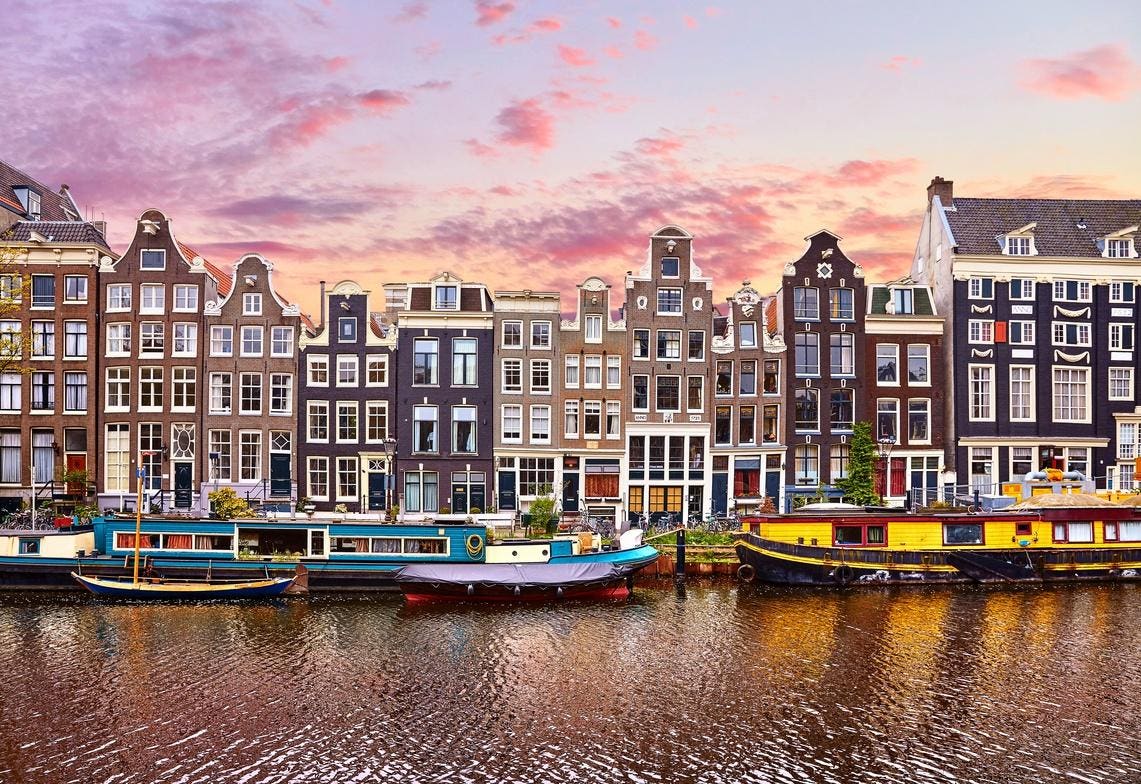 Dining And Drinking Around One Of Europe’s Most International Capitols: Amsterdam

The Dutch metropolis has always had it going on as an easy to navigate and incredibly diverse food and wine capital. However, it is really Amsterdam’s truly international, and low-key, style that allows it to shine culinarily. In some ways the very lack of a strong homegrown food tradition here allows the city to function as a stage for some of the greatest foods from around the world.

It is a shame that restaurants here need to be empty by midnight because of the pandemic, otherwise my best friend from Rome and I would have eaten another half dozen dishes at Neni: a chic, Eastern Mediterranean-inspired restaurant with an expansive wine list. The restaurant is carved out of an old garage and has a fun cocktail lounge called Lemonman on the top floor.

The menu is ripe for snacking and sharing with appealing dishes like a plate of falafel that pops with a hint of lime and spice. There are also classics like Hummus served with a nice helping of chilis. The wine list runs from classic Italian and Portuguese crisp whites to older-school bottlings from the Rhône. Unfortunately, the way the list classifies the wines is a little confusing: trying to gather them in over simplified categories doesn’t make it easy to navigate.

Fine Dining at Its Best

The Pulitzer has long been known as one of the City’s finest hotels and it does not disappoint with its gorgeous interior. We ate at the more casual Jansz which has quite a simple, limited menu for brunch on a weekend featuring fresh oysters, a seabass crudo with orange slices and a luscious pea soup. The wine list by the glass is pretty superb with unusual choices such as a handful of Pinot Noirs from Germany like the affordable and completely quaffable Spätburgunder, Markgräflerland, Martin Wassmer 2018.

Bridges at the Sofitel Legend the Grand is the hotel’s fine dining restaurant and serves an over the top, fish-focused six course chef’s menu. Ours included a tartare and a sleek and simple almost raw langoustine. Young and on-the-mark sommelier Roos Stevens keeps pace with the courses by pairing them with a host of Italian, French and Austrian wines: most of them white even the menu’s seafood focus.

The Kimpton DeWitt is a new swanky hotel perfectly located a short walk from the Dam, a major square and Centraal Station. The hotel was converted from three original houses that were built during the Dutch Golden Age.

The hotel is home to both Celia, which offers an abundant eggs-to-order breakfast and California-inspired, veggie-heavy food at night. The hotel also houses the swank bar Super Lyan from British mixologist kingpin Ryan Chetiyawardana.

Amsterdam is well served by transit and several speedy trams—that will take you all over the city—stop right in front of the hotel. The I Amsterdam City Card is a great find as it gives you access to all transit for 72 hours as well as museums like the Rijksmuseum and Van Gogh Museum. Be careful to read the instructions as you have to swipe the card both when boarding and exiting the tram (unlike most transit systems in the United States).

The bar has a groovy retro look with pink neon and red banquettes. When I stayed the cocktails—such as the Lyan Negroni made with Bombay Sapphire and—could be delivered to your room for a fun night in. With Covid rates up again, the bar is temporarily closed by offers cocktail kits so locals can enjoy their drinks at home.

At Celia, the veggies rule the roost with offerings that include cauliflower with yuzu and Bok choy with black garlic. A delicious wild spinach salad is served with smoked maceral and green apple. They are also even fish tacos on the menu!

I love to spice things up, so every time I go to Amsterdam, I like to eat Surinamese food. The country, located in South American next to Guyana and French Guyana, was a former Dutch colony and its food is an amazing mix of Indian, Chinese and Indonesian influences.

Its best-known dish is probably roti, the big, fluffy multi-layer pancake that can be dipped into chicken or red meat-filled dishes. Some of the other dishes include salads like a sweet and sour cucumber salad in a vinegar marinade.

This trip’s discovery was Marina Plaza in the Oosterpark area in the south of the city. Marina, the owner, is a bundle of energy; a good translator, as my Dutch is more than rusty; and serves a number of mixed plates. We had roti with a fatty and rich dipping sauce and a cucumber salad. It was a great final lunch to cap up a big eating tour around the Dutch metropolis.