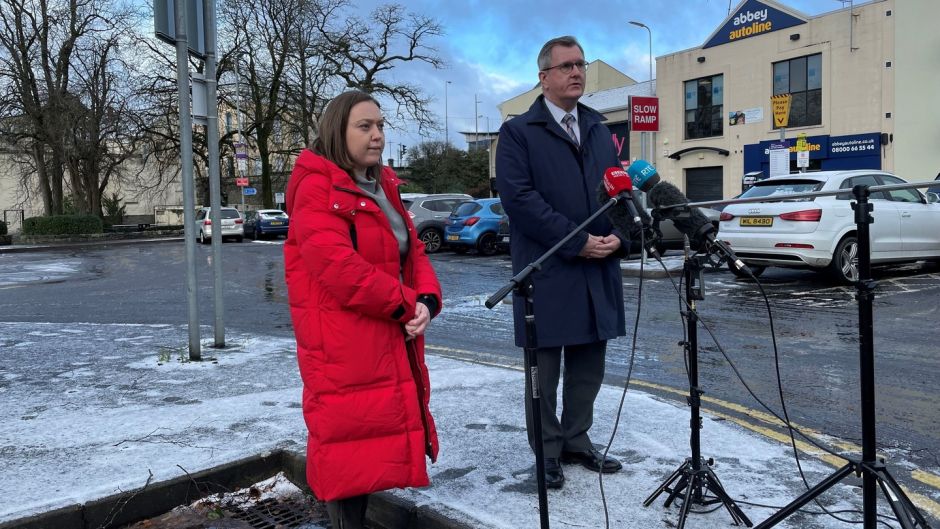 DUP leader Jeffrey Donaldson has welcomed a pledge from British foreign secretary Liz Truss to suspend parts of the post-Brexit deal if agreement cannot be reached with the European Union.

Talks are continuing between the UK and EU over the Northern Ireland protocol, which is fiercely opposed by unionists.

They regard the slew of checks at Northern Ireland’s ports while the region effectively remains within the EU single market, to avoid a hard border with the Republic of Ireland, as instead constituting a border in the Irish Sea.

Ms Truss said she would suggest “constructive proposals” to her EU counterpart, Maros Sefcovic, during talks on Thursday.

But she said she was “willing” to invoke article 16, which would suspend parts of the Northern Ireland protocol, if a deal cannot be struck.

It comes after Mr Donaldson reiterated his threat to withdraw his ministers from the Stormont Executive if progress was not made on the protocol.

However, SDLP leader Colum Eastwood condemned threats to invoke article 16 as being “as tired as the DUP and Sinn Féin threats to collapse Stormont”.

“It solves nothing, it helps nobody, it will only make things worse,” he said.

Mr Donaldson is due to meet Ms Truss this week, and welcomed her latest statement.

“She is right that unionists do not consent to the protocol and we need the Government to follow through on their commitment to safeguard the Union and protect Northern Ireland’s place in the UK Internal Market,” he tweeted.

“It is perfectly reasonable that goods from Great Britain which are destined to stay in Northern Ireland should not be subject to checks, and those goods destined for the EU market can be checked at our ports. We have already recommended legislation to make this workable as far back as 2019,” he said.

“It would go a long way to easing a difficult situation and should form the basis for constructive talks with Maros Sefcovic this coming week.

“Multiple engagements with businesses and business representative bodies see this as a pragmatic and sensible solution. Common sense is needed to de-escalate this issue.”

However, he was critical of Mr Donaldson’s threats to withdraw his ministers from the Executive.

“Further engagement and negotiations are the way forward. We do not need threats to pull down the Stormont institutions in the middle of a pandemic, but instead we need sensible, clear thinking,” he said.

“If Liz Truss means what she said in the Sunday Telegraph – namely ‘I will not sign up to anything … which still sees goods moving within our own country being subject to checks’ – then she must extract us from the EU’s single market for goods, customs code and VAT regime and end our subjection to EU laws and court,” he said.

“This is what is required to end all checks on inter-UK trade.

“My major problem with the foreign secretary’s words is that they jar with what her Government has been arguing for months in response to the judicial review challenge in which I and others are involved.

“Through their senior counsel, HMG has defended the very arrangements she now verbally disavows and in doing so has blithely and approvingly spoken of the protocol subjugating the Acts of Union.

“So, if HMG now accepts the folly of the protocol in all its parts, then get on with its demolition.

“Strong words are fine, but they need to be matched by actions. Empty rhetoric, like empty threats from some in unionism, only buy more time for the Union-dismantling protocol to bed in further.” – PA