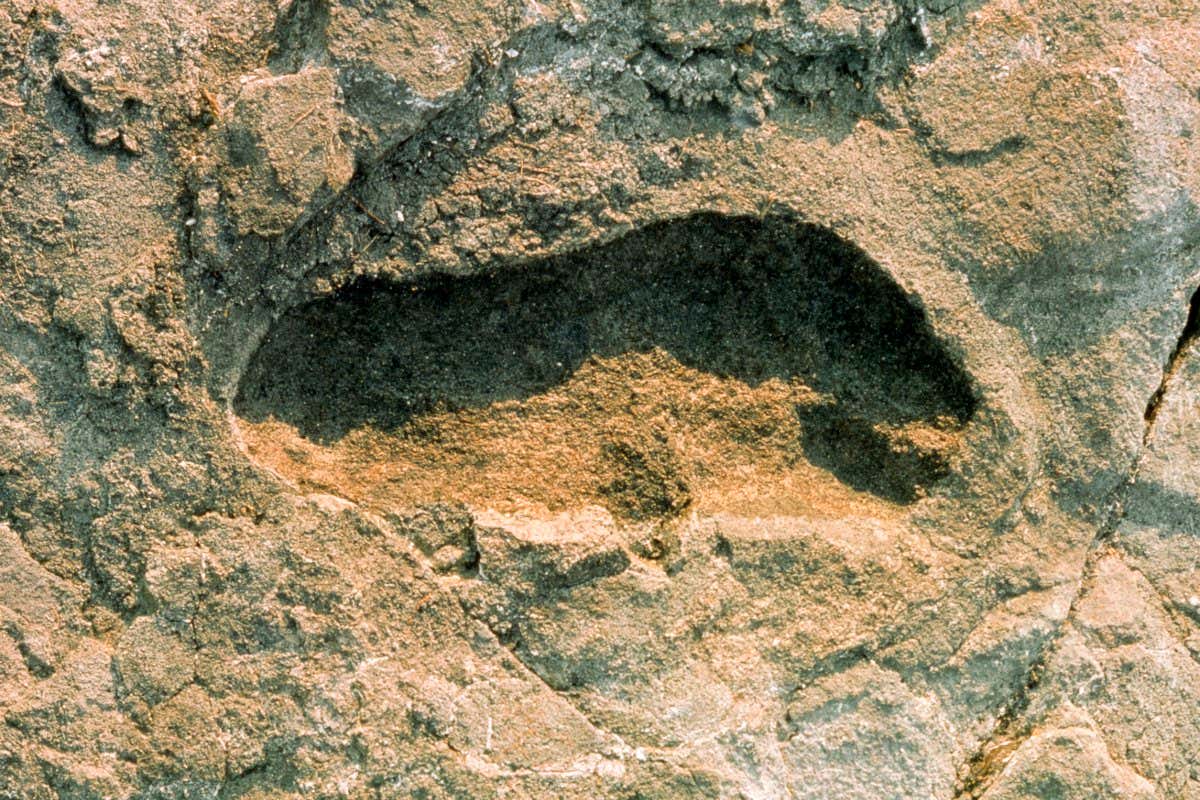 A set of 3.7-million-year-old footprints were initially thought to have been left by a bear walking upright, but have now been reinterpreted as the prints of an unidentified hominin that walked a little bit like a modern catwalk fashion model

Ancient footprints that were originally thought to have been made by a bear walking on two legs were actually made by an extinct human species. The discovery means there are now three known sets of hominin footprints from the same locale in Tanzania.

It isn’t clear which hominin species made the prints. The authors of the new study say they don’t match the other sets of footprints at Laetoli, a site in Tanzania, so were probably made by a different species. If this is true, it would mean that two hominin species coexisted in the same region at the same time.

“Not only are they not a bear, they are hominin and they are not the same hominin as those that made [the other footprints],” says Ellison McNutt at Ohio University Heritage College of Osteopathic Medicine in Athens.

The footprints were discovered in 1976 by Peter Jones and Philip Leakey. Excavating at Laetoli, they found five prints in a place they dubbed site A. The tracks had been left in soft volcanic ash that subsequently hardened into rock.

The pair’s colleague Mary Leakey suggested that the prints had been left by a hominin. However, later studies suggested that they were actually made by a bear walking on its hind legs. As a result, site A fell into obscurity.

Meanwhile, more footprints were found at Laetoli in a location a few kilometres away, labelled site G, and these were definitely made by hominins. The trail stretches 24 metres and includes prints (one of which is pictured above) from three individuals walking together. Both sets of footprints are 3.66 million years old and are thought to have been made by Australopithecus afarensis, the species to which the famous Lucy fossil belonged.

Now, McNutt and her colleagues have re-excavated the site A footprints. “The bear hypothesis was very reasonable at the time,” she says, because the prints do look unusual. But the sediment in them was never properly cleaned out, so their true shape wasn’t known. McNutt’s team cleaned the prints thoroughly and produced 3D scans of them.

The researchers compared the tracks from site A with footprints made by humans, chimpanzees and American black bears. “There are a lot of things that make it distinctly hominin,” says McNutt. For example, the big toes were proportionally much larger than the second toes, which is seen in hominins but not in bears.

The team was “very clever” to re-excavate site A and “it’s quite convincing that it’s not a bear”, says Marco Cherin at the University of Perugia in Italy. “I think it almost definitely is a hominin.”

McNutt and her colleagues also argue that the prints don’t match the more famous tracks at site G, so were therefore made by a different species of hominin. For instance, individual footprints at site A were relatively wide for their length, compared with those at site G. The hominin also seems to have cross-stepped, meaning it brought its feet across its body’s central line – a gait seen in its most exaggerated form when fashion models walk down runways placing one foot directly in front of the other.

“It’s not afarensis,” says McNutt. “It is certainly Australopithecus or something very like it.” Beyond that, she says we can’t be sure. However, she adds that elsewhere in Africa, there is clear evidence of multiple hominin species coexisting in the same regions, so it wouldn’t be surprising if the same was true at Laetoli.

Cherin isn’t convinced about that. “For the moment, I would be most cautious about the possibility of having two hominin track-makers in Laetoli,” he says.

In 2016, Cherin’s team described two additional hominin trackways at Laetoli, at a place called site S. These were interpreted as belonging to A. afarensis, but they are a range of sizes, and Cherin says the site A prints don’t look very different in terms of their size and shape from the site S prints, which might suggest they were all left by members of the same species. He highlights a study published in July that shows it is necessary to have more than 20 prints to get a reliable picture of how an animal walked. There are only five prints at site A.

Sign up to Our Human Story, a free monthly newsletter on the revolution in archaeology and human evolution