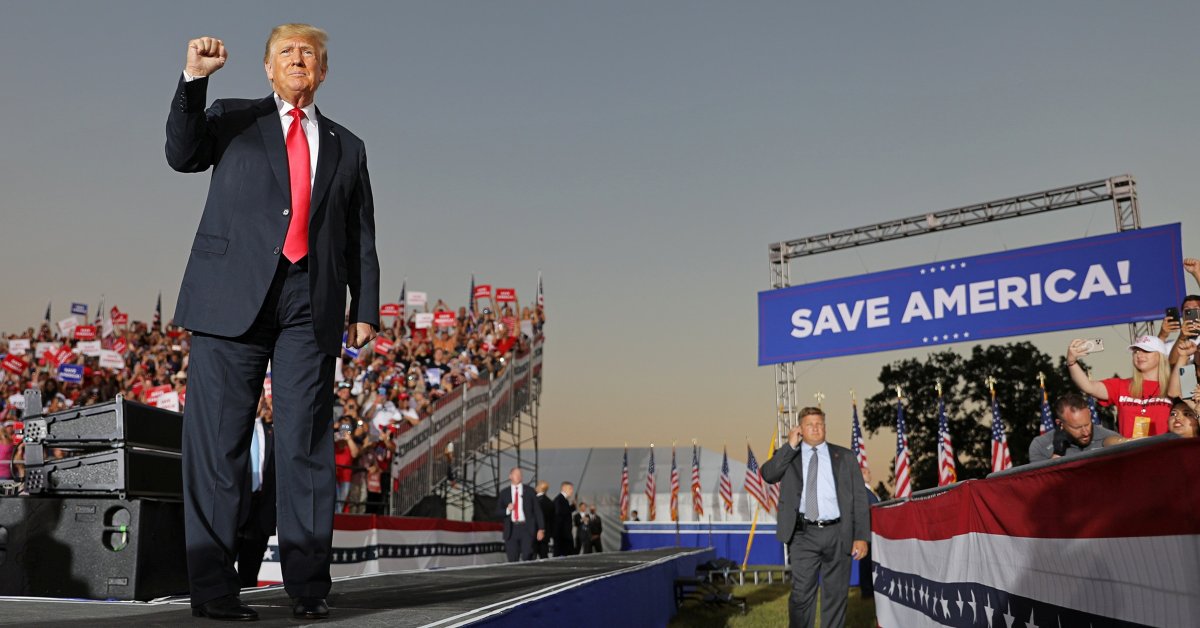 For millions of Americans, Jan. 6 was a jarring day that ended their nation’s 150-year streak of peaceful transitions of power.

For Donald Trump, it was a windfall.

Ever since his supporters stormed the Capitol as Joe Biden’s victory was being certified, Trump has continued to falsely insist he won in 2020 and paint the unrest as the result of a stolen election. In December, Trump said that the real insurrection “took place on Nov. 3,” recasting the violence that left five dead as an “unarmed protest of the rigged election.”

It has proved to be a potent—and lucrative—lie. Nearly half of Republicans in the country believe Trump won in 2020, according to recent polling. For months, fundraising emails from Trump that claim that the 2020 election was “rigged and stolen” have pointed readers to a bright red button that reads -DONATE TO SAVE AMERICA. Trump’s political machine raked in at least $50 million in the six months that followed the Jan. 6 Capitol riot, according to filings with the Federal Election Commission, an unusually high figure for a defeated former President during his first year out of office and nearly eight times what Trump raised in outside funding while seeking the GOP nomination in 2015.

The fallout from Jan. 6 has also allowed the former President to strengthen his grip on the Republican Party. Lawmakers’ reactions to the attack have become a personal loyalty test: at least six Republicans who have criticized the rioters have been targeted for primary challenges by candidates loyal to Trump. Members of Congress who supported the House investigation into the attempted insurrection have been featured in critical ads by pro-Trump groups. “Sometimes there are consequences to being ineffective and weak,” Trump said in May of the “wayward Republicans” who voted for the congressional probe to move forward. Trump’s office did not respond to requests for comment.

Trump and his allies are trying to do more than paper over the events of the day. They are using it as a rallying cry to raise the specter of more violence if future voting doesn’t go Trump’s way in the 2022 midterms or, should Trump run again for President, in the 2024 elections. Asked by ABC News’ Jonathan Karl in a March interview about the individuals who breached the Capitol and threatened Vice President Mike Pence’s life over his decision to uphold the legitimate election results, Trump backed his supporters: “Well, the people were very angry.”

There appeared reason to hope, in the raw immediate aftermath of Jan. 6, that the spectacle of political violence in the halls of Congress might spur a national course correction.

That didn’t happen. Instead, disinformation about alleged election fraud has become mainstreamed as a plank of both the Republican Party’s political strategy and Trump’s potential 2024 run. While most major GOP advertisers have stayed away from highlighting the Jan. 6 insurrection in their ads, Republicans routinely use myths around election fraud as a central message in their funding drives and efforts to collect contact information from supporters, according to analysis of Republican political–ad spending by Bully Pulpit Interactive, a left-leaning digital-advertising firm.

Read more about the Jan. 6 anniversary

Since July, the pro-Trump Save America Joint Fundraising Committee, which brought in more than $20 million in the first half of 2021, spent over $1 million in Facebook advertising, using false claims of fraud in the 2020 vote to fundraise and build lists of supporters, according to the Facebook Ad Library. One ad posed the question, IS TRUMP THE TRUE PRESIDENT? Those who clicked “Answer Now” were sent to a fundraising page and asked for their emails.

The strategy is not only raking in money. According to an NPR/Ispos poll released on Jan. 3, 45% of Republicans believe there was major fraudulent voting that changed the result of the presidential election. Nearly one-third of Republicans polled believed the storming of the Capitol on Jan. 6 was carried out by groups from the far-left “anti-fa” movement or government agents, a conspiracy theory propagated early on by right-wing media outlets, and 38% of Republicans described Jan. 6 as a “riot that got out of control,” rather than an attempt to overturn an election.

Among all Americans polled, 64% agreed that American democracy is in crisis and at risk of failing. That sense of alarm boosts Trump’s power, says Larry Sabato, a political analyst and director of the Center for Politics at the University of Virginia. “Jan. 6 has increased his rank and file’s anger and resentment,” he says. “It’s confirmation for them that everybody else is out to get them.”

As Trump and his allies have used Jan. 6 to raise money and woo voters, they have also leveraged it to weed out GOP members critical of Trump’s -actions that day. After U.S. Representative Peter Meijer of Michigan voted to impeach Trump for trying to overturn the election result and staying silent for hours while his supporters violently laid siege to the Capitol, Trump called him a “RINO” (“Republican in name only”) and endorsed a primary challenger. Trump also endorsed a challenger against Representative Jaime Herrera Beutler of Washington State, who voted in favor of his second impeachment and said Trump encouraged “would-be assassins” with his remarks at a rally before the attack. (Trump was acquitted by the Senate in the impeachment trial.)

Read More: For the Jan. 6 Rioters, Justice Is Still Coming

Groups supporting the former President joined the fight. When 35 House Republicans voted in May to form a commission investigating the riot, a pro-Trump super PAC stepped in. Drain the DC Swamp, registered in Marlton, N.J., spent more than $210,000 for 13 ads on Facebook and Instagram in a two-week blitz, labeling the GOP lawmakers “communist traitors” and “turncoats.” The campaign, which continued through mid-July, appeared in Americans’ Facebook and Instagram feeds more than 6.7 million times.

After Representative Nancy Mace, a Republican from South Carolina, voted on Oct. 21 in favor of holding former Trump adviser Stephen Bannon in contempt of Congress for failing to cooperate with the House investigation into Jan. 6, Drain the DC Swamp again went on a spending spree. On Dec. 13, the group dropped at least $14,000 for five different ads on Facebook and Instagram calling Mace “anti-Trump” and “a disgrace.” The ads appeared more than 450,000 times, reaching an audience largely over the age of 55, per the Facebook Ad Library.

The events of Jan. 6 are “being used as a resource for Trump,” says Amy Fried, a political-science professor at the University of Maine, “to raise funds, to keep himself front and center, to bind himself with loyalty to his supporters.” Fried, who co-authored the book At War With Government: How Conservatives Weaponized Distrust From Goldwater to Trump, sees this as an escalation of a decades-long tendency by Republican politicians to undermine the public’s faith in government. Republican voters, she says, have “gotten used to that diet of distrust.”

That erosion is very hard to reverse. “We can never take the American system for granted,” says Sabato. “We’re just as vulnerable as most other societies-—most other democracies—to deterioration in our standards and values.” One year later, there’s every reason to fear that the violence of Jan. 6 may not have marked the end of the nation’s political degradation, but its acceleration.

—With reporting by Julia Zorthian