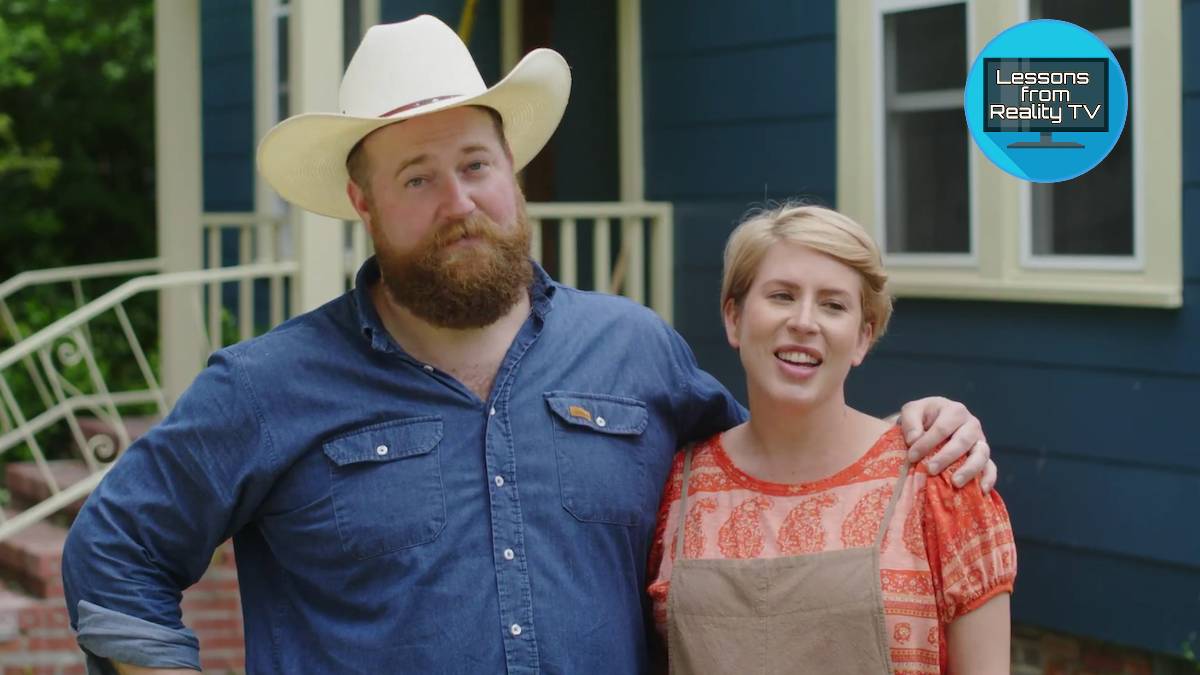 Ben and Erin Napier of “Home Town” are well-known for their charming renovations, but on the latest episode, they take a walk on the wild side, with a renovation that seems light years beyond their usual style.

In the episode “Bones and Bugs,” Erin and Ben meet with Jon and Ramon, a couple moving from Jersey City, NJ, to Laurel, MS, for more space and some small-town charm. While Ramon has a simple midcentury style, Jon, an artist, says that he has a huge collection of bones and bugs.

“I’ve always been attracted to things that are different,” Jon explains.

The home this couple buys for $55,000 skews more in Jon’s favor, having an undeniable Gothic vibe. Their renovation budget leaves Erin and Ben with $130,000 to make this home as unique as its owners—and here’s how they pull it off.

Dark, vivid colors on the exterior make a strong statement

Even before the renovations, Jon and Ramon’s new house has a lot of character.

It reminds Erin of the Gothic fantasy work of film director Tim Burton.

“It’s something about the proportions of it, how vertical it is, and how narrow,” she says.

Still, Erin knows the exterior needs a little something extra, so she chooses a curious color that she knows both Jon and Ramon will love.

“The color of the house would actually be so, so dark,” Erin says to Jon and Ramon when they first visit the house. “It would be a very dark teal.”

Jon and Ramon love the idea of the deep teal, so Erin goes ahead with her plan for paint, updating the trim with ecru (instead of plain white) and giving the door a coat of chartreuse green.

“It seems maybe a little eclectic, but that’s the intent,” Erin says.

These colors are certainly unique but don’t feel too wild. The deep teal makes the house stand out from the lush greenery in the yard, and the yellow-green door proves that no color is off-limits in small doses.

Show off collections in a glass-door curio cabinet

Erin and Ben have plans to demolish the kitchen, turning the tiny room into a dining room, and then creating a much bigger kitchen in another space.

While it’s no longer needed in the kitchen, Ben is determined to make it a functional part of the house.

“It’s the only thing they liked about the kitchen,” he explains.

Ben and Erin decide to turn it into a “cabinet of curiosities” for Jon’s collection of bones and bugs, sanding off the white paint and replacing the center of the cabinet doors with glass.

“I like it if it’s glass,” Erin says. “I’m curious about the curiosities.”

When the Hoosier cabinet is finished, it’s a perfect display cabinet for the living room. The newly refinished wood adds warmth to the living space, and the glass cabinets add charming storage for all of Jon’s treasures.

This piece proves that it pays to upcycle old kitchen features and that storage can be classic and charming as well as functional.

Jon and Ramon have very different styles, so Erin needs to find a compromise between Jon’s eclectic style and Ramon’s midcentury aesthetic.

While Ramon wants a white kitchen, Erin realizes that she probably won’t be able to do the whole kitchen in white. Instead, she installs beautiful cabinets made of alder wood, then includes white details like a counter, sink, and herringbone tile backsplash.

While the cabinets, counter, and sink look great, it’s the backsplash that really stands out in this kitchen. With the open shelving showing off the full wall of tile, the backsplash is able to make a serious statement.

“I love it when we can really get in there and do some major tile work on the entire wall,” Erin says. “It doesn’t always work with the budget, but in this case, it did. And it makes such an impact.”

Add a luxe look, with a chandelier above the tub

Jon and Ramon want an impressive en suite bathroom, so Erin and Ben suggest turning the home’s third bedroom into a gorgeous bathroom. The space has two matching closets, a shower, two vanities, plus a stunning claw-foot tub right in the middle.

“For Jon and Ramon, a bathtub is, like, the most special thing about this house,” Erin says. “I love a bathtub, and I love it even more when a bathtub can be a statement.”

But even with all these fabulous features, Erin still isn’t done. She finds a glamorous chandelier and paints it chartreuse to match the front door.

“If we’re going to make this statement bathtub, I think we should have a statement light above it,” Erin says. The chartreuse matches the front door.

Make sure your doghouse matches the main house

In the end, this house looks so good that Ben and Erin decide to build a second one (on a smaller scale).

Jon and Ramon have always wanted a dog, and now they have space for one. So Ben and Erin decide to give their new dog a home that matches the main house in both color and character.

“I want it to taper out, so it looks like it’s a little off-kilter,” Ben says, discussing the shape of the doghouse and its very steep pitch.

When the doghouse is finished, Erin has mixed feelings about it.

“It’s very cool, but it is kind of ridiculous,” she says.

Still, the matching color and the unique shape serve as inspiration not only for dog owners who want to create an eccentric home for the third member of their family, but also for homeowners everywhere who want to add a unique twist to their abode.