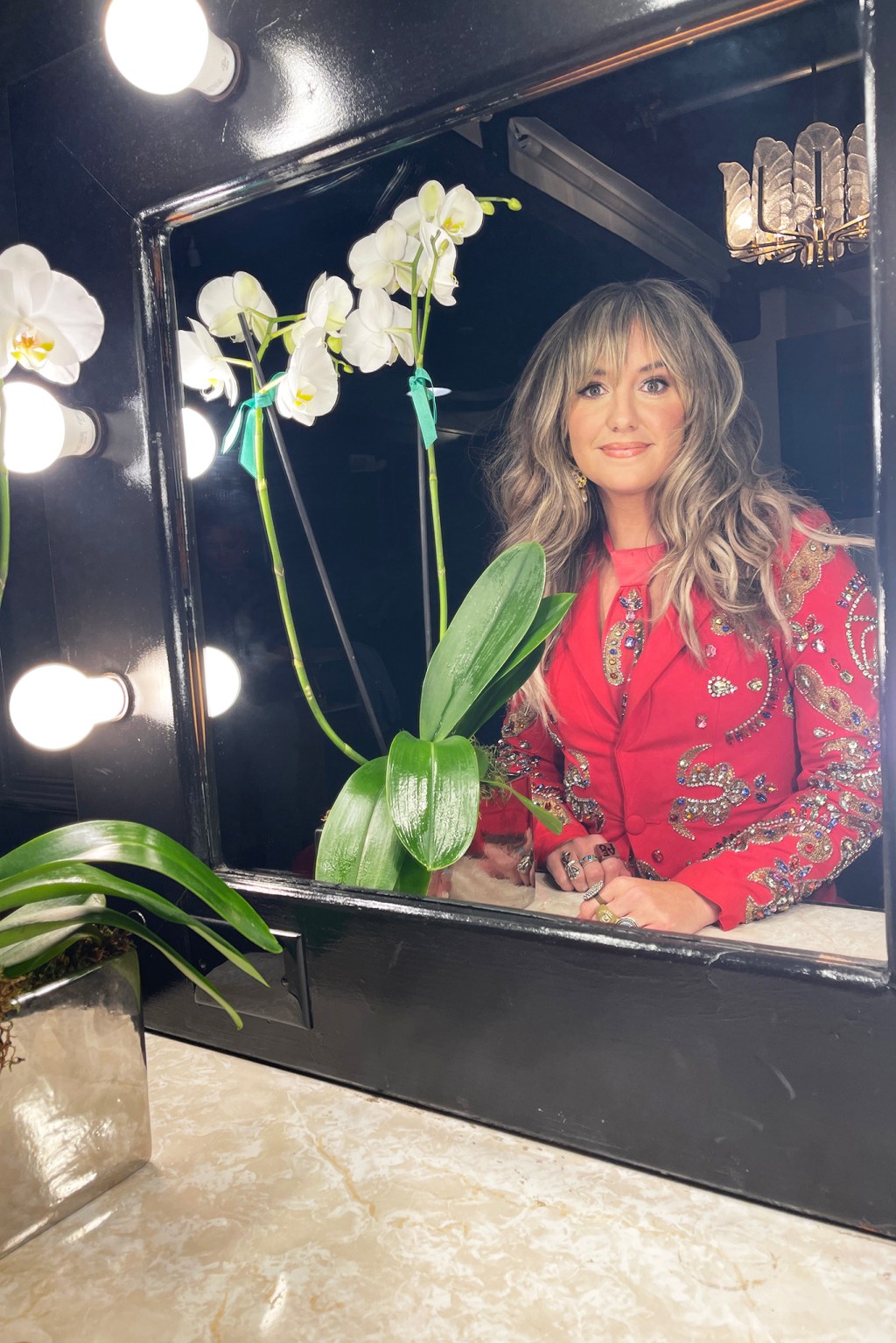 Country with a flair, or flare, depending upon the context — that’s how rising artist Lainey Wilson describes both her music and her fashion.

The 29-year-old Louisiana native has gotten quite a bit of buzz of late, not only for hitting the top of the charts with her single, “Things a Man Oughta Know,” but also her distinct retro style centered around flared bell-bottom pants. Earlier this week, both were on display when Wilson made her late-night debut on the “Jimmy Kimmel” show decked out in a fire engine red hand-beaded suit jacket and tie from Any Old Iron with custom Cat O’Nine bell-bottoms, Jeffrey Campbell platform shoes and Neil Lane jewelry.

“Everyone was so welcoming,” Wilson said from California where she was preparing for a show. “It was definitely one of the biggest moments of my life.”

Wilson was born and raised in the tiny town of Baskin, La., population 300, and started writing songs about tequila and cigarettes when she was just nine years old. But it was a family trip to Nashville’s Grand Ole Opry that same year that convinced her to pursue a path in country music.

Even though she moved to Nashville right after graduating from high school, it took a decade before she finally hit it big. “August 1 was the 10-year mark of me being in Nashville,” she said. “Everyone said it was a 10-year town, and they were right.”

Although it wasn’t easy to stick it out for a decade, Wilson was determined. She lived in a camper for the first three years, writing songs and literally knocking on every door on the city’s Music Row. “Half of them wouldn’t open at all, but if they did, I asked for whatever advice they would give.”

Despite the rejection, she kept plugging away, keeping her hopes up that if she stayed in town and stayed true to who she was that eventually she’d break through. “If you have a Plan B, Plan A will never work out,” she said.

She put out independent albums in 2014 and 2018 that caught the attention of Sony Music, which signed her to a publishing deal. That was followed by a recording contract with BBR Music Group and the release of her first major label album. It was then that things started clicking. In 2020, she made her debut on the Grand Ole Opry debut, was named MusicRow’s Next Big Thing 2021, and was selected as one of the “Country Artists to Watch in 2021” by Strings & Spurs. She just wrapped up a stint on the Jason Alden tour and will head out with Dierks Bentley on his tour next year. “It’s all about paying your dues,” she said.

Even though she stayed upbeat by focusing on the “little things — little opportunities that at the moment felt big,” it was taking “Things a Man Oughta Know” to the top of the charts that really brought it home.

“Wow, we did it, we got here,” she said. “We did way too much celebrating, but we’re ready to do it again. Hopefully this is the beginning of a very long, fruitful career.”

The hit single is on her album, “Sayin’ What I’m Thinkin,’” which was released in February. “We recorded the album in March of 2019, but we’re waiting for the perfect time to release it,” she said. Putting it out during the pandemic was intentional since it was time when “people needed music.”

The album features a lot of cuts that are personal to the singer, such as the title track which pretty much sums up the way she looks at life. “I feel strongly about saying what you think, saying what’s on your heart, but also thinking before you speak,” she said. “Sometimes it’s hard to be honest, but at the end of the day, it ain’t doing anybody any good to not be. Every song we put on the record we basically asked, ‘Is this song saying what I’m thinking?’ If it’s not, it didn’t make the list.”

Even so, it’s hard for her to call out her favorites. “Every song I write I feel is my child,” she said. “I take so much pride in my songwriting and actually consider myself more of a songwriter than an artist.” She recalls how now-superstar Luke Combs used to come to her camper — “My house on wheels,” she said with a laugh — to write with her.

But pushed to pick one standout on the album, she said “Things a Man Oughta Know,” is definitely her favorite to perform. When she first started singing it live, no one recognized it, but now, “20,000 people know every single word,” which is still hard for her to fathom.

As her music continues to make its mark, Wilson’s fashion is also helping her stand out among other country artists. She said she’s always been a fan of bell-bottoms and recalls a pair of leopard printed pants she had when she was six. “My mom had to tell me to take them off and wash them. I wanted to wear them every day,” she said.

Now her propensity for bell-bottoms has become her signature, and a reflection of her music. “I call it ‘bell-bottom country’ — country with a flair. What makes you special is your story, your look, your sound, the unique things that make you you.”

Wilson started working with stylists Juli & Jeri in Nashville for the first official record label shoot and they helped her create her style. “They knew what I already liked but elevated it and took it up a notch.”

They’ve also helped her select outfits that “make a statement when you walk into a room that you deserve to be there,” she said. But they never push her too far, ensuring she still feels comfortable in her own skin.

When she saw the red blazer from Any Old Iron, she knew immediately that she had to have it. “It fit like a glove and reminded me of Dolly’s 2019 Grammy’s red carpet look. It made me feel sassy and classy — it was a no brainer, I had to have it.”

Now that Wilson is moving into the big leagues, what’s her vision for the future? “My goal is to keep doing what I’m doing,” she said. “I believe people need to be themselves and be unapologetic, but I also want them to know they’re not alone. I want them to know we’re all in this together and I love them. I want them to look into my music and feel that love.”