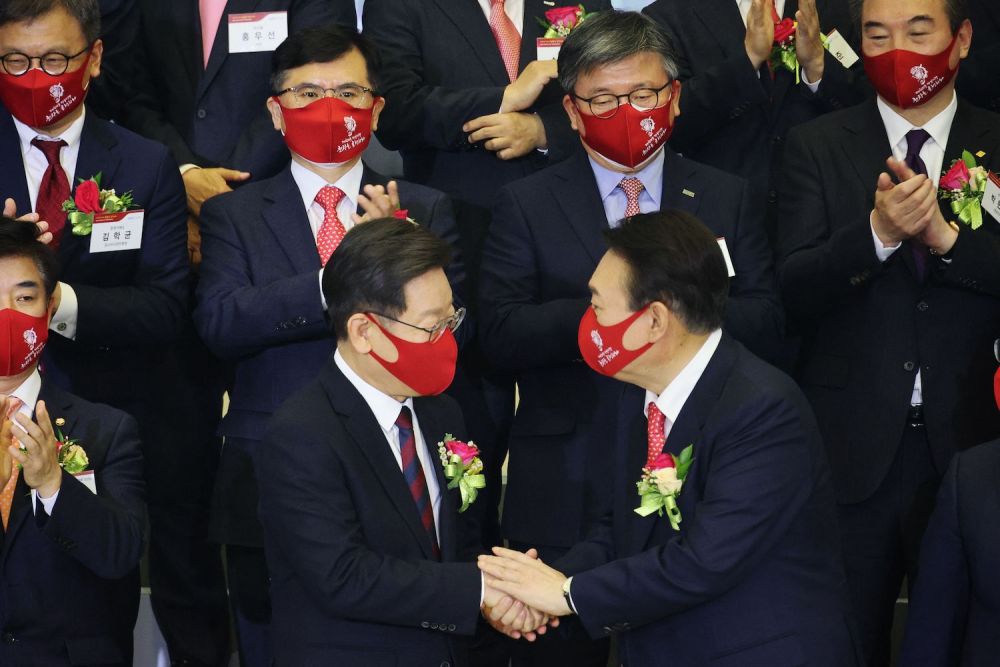 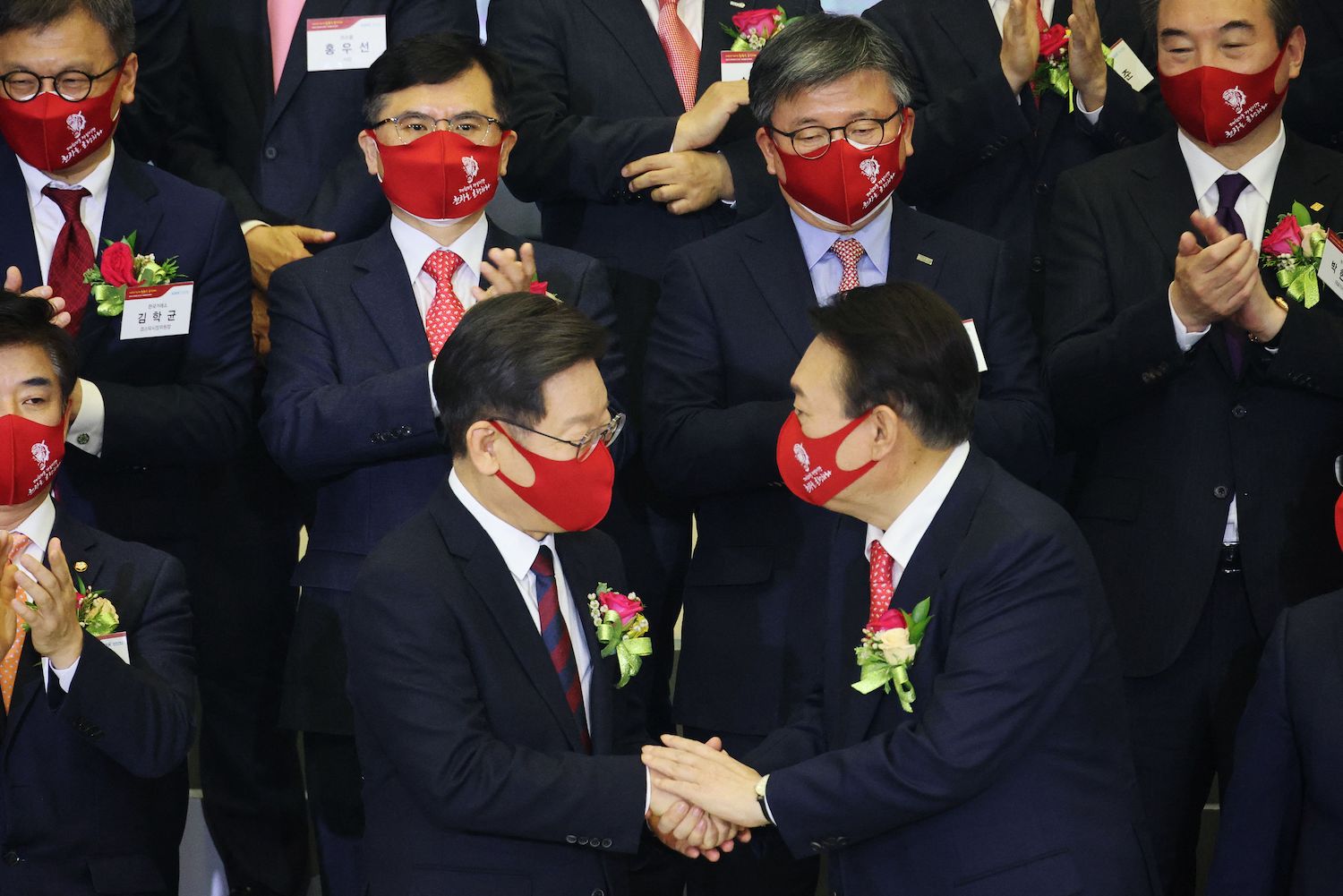 South Korea’s presidential race is heating up as the main contenders are set to meet next week for their first live debate to make their cases to succeed President Moon Jae-in.

With less than six weeks to go until a vote on March 9, the choice is largely between two candidates: Yoon Seok-youl of the conservative People Power Party and Lee Jae-myung of Moon’s Democratic Party.

Both men are relative outsiders in South Korean politics, as S. Nathan Park noted in FP earlier this month, with neither following the customary path from the legislature to the Blue House. Yoon made his name as the prosecutor who helped put former President Park Geun-hye behind bars, while Lee was most recently the governor of Gyeonggi, the country’s most populous province.

Yoon had initially been the frontrunner by a large margin until a series of scandals and party infighting dragged him down. Lee has led most polls in January, but Yoon has shown some resilience, leading in the two most recent polls.

As well as the immediate issue of navigating the country out of the coronavirus pandemic, the winning candidate will be expected to address widening inequality and a cost of living crisis that has plagued the world’s 10th largest economy. The problem is most acute in the housing market, where the average price for homes in the greater Seoul area has doubled in the past five years.

Lee has talked up one solution to the country’s economic divide: A universal basic income, as well as plans for basic housing and finance programs.

Those lofty goals have yet to be matched by the campaign’s tone, which has been noted for its mudslinging. With both candidates campaigning while managing a slew of scandals, voters will have to decide between which party they think is the lesser of two evils, Soo Kim, a Korea analyst at the Rand Corporation, told Foreign Policy. The choice will essentially come down to “which one can we tolerate for the next five years,” Kim said. “Hopefully, either Lee or Yoon will be able to disprove that.”

On foreign policy, the two men present starkly different visions, as Victor Cha notes in Foreign Policy. While it’s common for a progressive and conservative candidate to disagree on North Korea policy, an array of other diplomatic issues divide the candidates this time around with differences apparent on China, the military relationship with the United States, and energy policy.

Ukraine developments. U.S. Secretary of State Antony Blinken has declared the ball in Russia’s court after written responses to Russian demands on NATO expansion and security guarantees were returned to Moscow on Wednesday. Although yet to be published, the responses are likely to track with verbal statements already made by Blinken, which have included a rejection of any attempts to restrict NATO expansion but have offered cooperation on arms control and military exercises.

Russian deputy foreign minister Alexander Grushko indicated that Russia would be in no rush to react. “We will read it. Study it. The partners studied our project for almost a month and a half,” Grushko said.

While the United States awaits Russia’s response, the prospects for a resolution to Ukraine’s war with pro-Russian separatists have become brighter following Wednesday’s Normandy Format talks in Paris. Russian official Dmitry Kozak said the meeting had re-confirmed a cease-fire and that four-way talks would continue in two weeks to talk through interpretations of the Minsk accords.

Castro’s inauguration. U.S. Vice President Kamala Harris will be among the audience of dignitaries today in the Honduran capital Tegucigalpa for the inauguration of Xiomara Castro, who is set to become the country’s first female president. Castro’s first days in office are already likely to prove difficult after a rebellion in her Libre Party blocked the election of her preferred candidate for Congress president last week.

Her immediate predecessor, Juan Orlando Hernández, is expected to face a much stiffer challenge, with a U.S. indictment for drug trafficking reportedly imminent.

The India-Central Asia summit. Indian Prime Minister Narendra Modi is the virtual host of today’s India-Central Asia summit, with the presidents of Kazakhstan, Uzbekistan, Tajikistan, Turkmenistan and Kyrgyzstan all expected to attend the online event. The meeting, which is expected to discuss Afghanistan as well as regional integration, is the first to take place at the leader level.

Afghanistan’s crisis. U.N. Secretary-General António Guterres has called for the unfreezing of $9 billion of Afghan central bank reserves held in U.S. institutions to help as he warned that the country is “hanging by a thread.” The United States froze the funds in August to prevent them entering Taliban hands. Chinese U.N. ambassador Zhang Jun has condemned the U.S. asset freeze as “no less lethal than military intervention.”

Lukashenko speaks. Belarusian President Aleksandr Lukashenko is set to address an extraordinary session of parliament today, although his office has yet to give a reason for the speech. It’s possible Lukashenko is delivering a long-delayed annual address after he failed to deliver one in 2021.

The tiny European nation of Andorra suffered a widespread internet outage earlier this week, affecting more than half the population of roughly 77,000, as a result of a cyberattack on the country’s sole telecom company. Was the culprit a state actor? A ransomware gang? Authorities have yet to find those responsible, but they have a motive: Forcing competitors offline in a livestreamed tournament for the online game Minecraft, with the last player standing set to win a $100,000 prize.

Although they were knocked out due to the outages, the Andorra-based players Auron (who has more than 11.4 million followers on his Twitch channel) and Rubius (11 million followers) have not given up their competitive streak and have offered a $10,000 reward for whoever finds the hacker responsible.