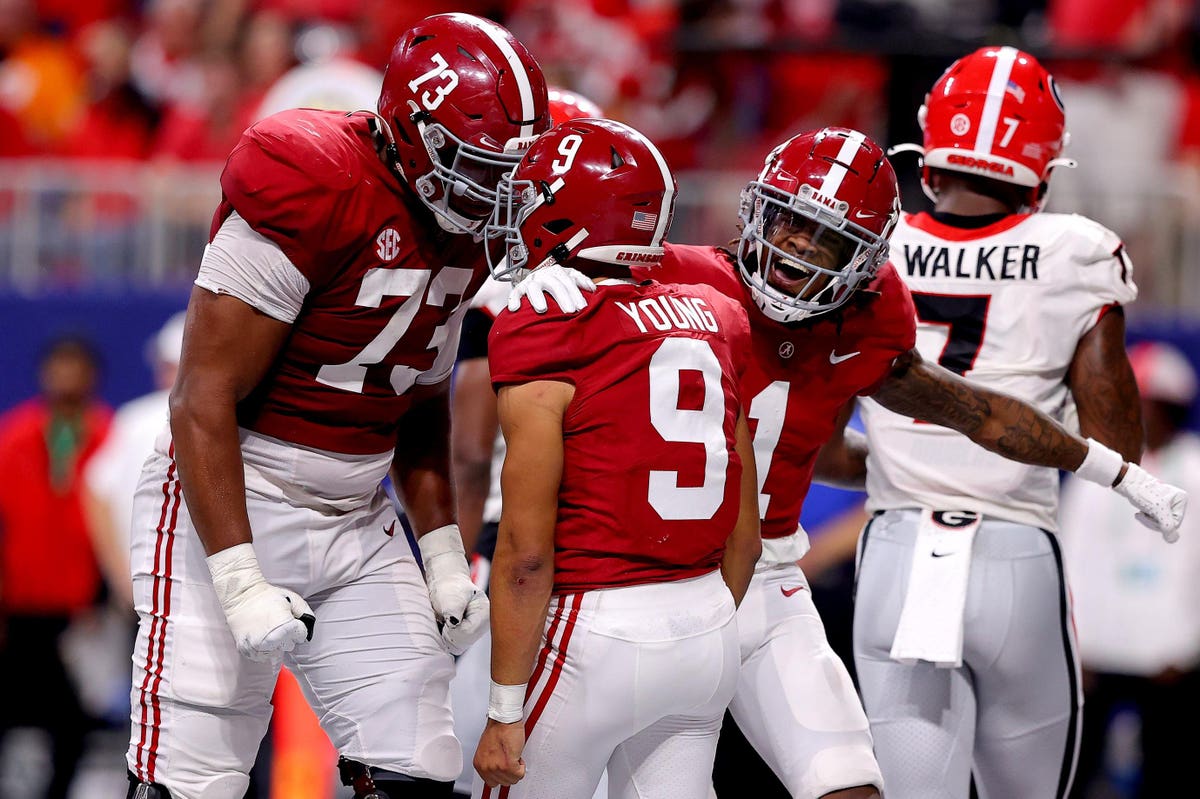 The College Football Playoff will crown a national champion tonight when SEC rivals Georgia and Alabama take the field at Lucas Oil Stadium in Indianapolis. The game could also payoff one bettor more than $3 million.

Last Wednesday, Houston Gallery Furniture store owner Jim McIngvale placed a $1.2 million bet on Alabama (+125) to beat Georgia. The bet was made on the Caesars Sportsbook app in Colorado.

Clearly a lot of bettors are siding with the Crimson Tide, including a Louisiana bettor who wagered $300,000 at Caesars Sportsbook on the Tide to roll.

Talk about a double down. McIngvale is known for his massive bets to mitigate risk on his furniture promotions. He’s had similar multi-million bets on the World Series and his hometown team Houston Astros, and last year’s Super Bowl on the Tampa Bay Buccaneers.

With an estimated $3-4 million in mattress sales ahead of the national championship game, Mattress Mack is making sure he has a comforter to pull over the sheets in the event of an Alabama victory.

“We’ve done a lot of these promotions in the past and with a game with this much attention, wanted to be a part of it,” McIngvale told ESPN. “[I] was surprised to see Alabama as a 3-point underdog. They have good name recognition and brand awareness for fans, so this comes with a good, high perceived value. Anyone who buys a mattress before the game gets their money back if Alabama wins.”

The CFP National Championship is not only the biggest game of the college football season, but the most bet game by a huge margin.

Caesars VP of trading Craig Mucklow said the amount of money wagered on the game “eclipses the handle on all football games this year.”

Alabama and Georgia are both 13-1 with the Crimson Tide winning the SEC Championship over Georgia, 41-24. In that contest, Alabama QB and Heisman Trophy winner Bryce Young passed for 421 yards and 3 touchdowns without being sacked in 44 pass attempts. Georgia QB Stetson Bennett passed for a season-high 340 yards with 3 touchdowns and 2 interceptions. He was sacked 3 times in 48 pass attempts.

Here are the quarterbacks passing props on Caesars Sportsbook app for the national championship game.

Despite Alabama’s 41-24 win over Georgia in the SEC Championship game, there is a reason Georgia is favored.

“They’ve been the better team over the course of the season and one game doesn’t change that,” Dr. Bob notes, citing past examples including Alabama’s 2011 national championship win over LSU after losing at home to the Tigers during the regular season.

For the math projection in this game, Dr. Bob only used Georgia QB Stetson Bennett’s performance level in games against good pass defenses, but his great performance (10.0 yppp) against a good Michigan defense elevated his rating in such games to being 2.5 yards per pass play better than average. That’s still lower than his overall rating of +3.4 yppp (9.5 yppp against teams that would allow 6.1 yppp to an average QB).

He continues with additional details and adds that Alabama’s offense gained 535 yards at 7.8 yards per play in the SEC Championship game against a Georgia defense that still rates as the nation’s best this season.

“However, it’s unlikely that Bryce Young will enjoy his receivers running for 201 yards after the catch, as was the case in that game.”

Alabama will also be without WR John Metchie III in the national championship game. Metchie was injured in the SEC Championship game after catching 6 passes for 97 yards and a touchdown.

Young only completed 59% of his passes, which is about what was expected, and the yards after catch in that game was extreme and unlikely to be replicated. Young averaged only 5.8 yards per pass play (yppp) against Cincinnati in the semi-final game, and just 4.7 yppp against Auburn the game before his success against Georgia – which makes Young’s 9.6 yppp in SEC Championship game look even more like an outlier. In fact, Young’s performances against good pass defenses this season were mostly mediocre at best. In addition to averaging just 5.0 yppp combined against Auburn and Cincy, Young averaged only 6.1 yppp against Florida, 6.6 yppp against Texas A&M, and 6.0 yppp against LSU. Young did play well against good, but not great pass defenses of Miami, Ole’ Miss, Miss State, and Tennessee but he mostly struggled against really good pass defenses, aside from the yards after catch enhanced performance against Georgia.

Dr. Bob expects Georgia to blitz Young more often in this game, as Young completed 17 of 23 passes for 308 yards when the Bulldogs didn’t blitz him, compared to completing just 9 of 21 passes for 113 yards against the blitz.

The math favors Georgia by 4 points with a total of 52 points.

Coaching adjustments and strategy will be fun to watch as former Saban assistant and Georgia head coach Kirby Smart game plans and adjusts against Alabama’s Nick Saban again. Saban is 4-0 against Smart with an average margin of victory by 11 points. But the best players on the best two teams will settle the score in tonight’s national championship game.

You can bet on it.