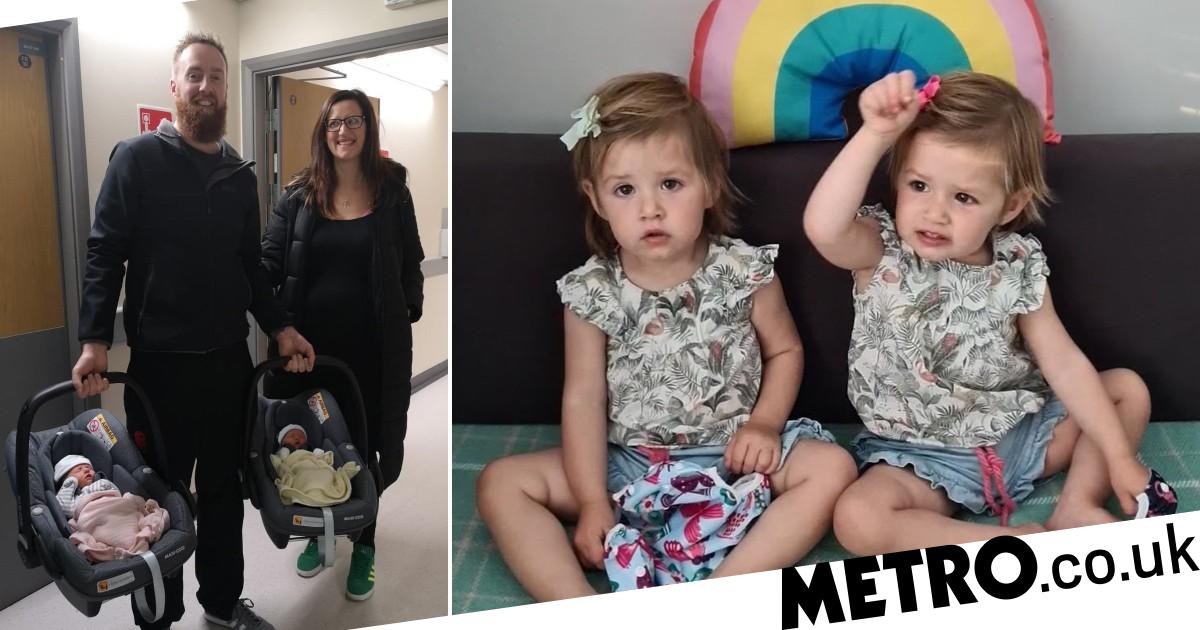 Helen Corsi-Cadmore and her husband James Cadmore’s journey to becoming parents wasn’t an easy one.

After trying to conceive for a year, Helen suffered her first ectopic pregnancy – which is when a fertilised egg implants itself outside of the womb, usually in one of the fallopian tubes – in 2016.

Helen later suffered a miscarriage followed by a second heart-breaking ectopic pregnancy after a successful round of IVF treatment.

Finally, after another round of IVF, Helen gave birth to identical twin girls, Bella and Sofia, in March 2020.

Recalling the first ectopic pregnancy, Helen said: ‘I started bleeding, then was in a bit of pain. This carried on and the pain got worse.

‘It was at a time when I was opening a shop, and it was my business partner who told me to go home and rest.

‘I had some blood tests and then a very stern sonographer, who was very matter of fact, just said: “There’s an egg in the fallopian tube”.

‘There was no empathy and I felt really alone. A consultant gave me 10 minutes to decide what to do; medically manage the pregnancy or operate.

‘We went down the non-operation route initially but that night at home the pain became excruciating. I ended up having an emergency surgery as I was bleeding internally, and I lost a fallopian tube.’

Ectopic pregnancies occur in around 11,000 pregnancies a year, and it’s not possible to save the unborn baby.

Helen recalled: ‘I’d never even heard of an ectopic pregnancy. There’s definitely a huge lack of awareness considering how common they are.

‘Little did I know I was going through something that was life-threatening – but many of the signs and symptoms of an ectopic are similar to a miscarriage.’

It took Helen three months to recover mentally and physically from that first pregnancy, and a further nine before she and James decided to try again.

Sadly, the couple’s second attempt ended in a miscarriage. They were then advised to try IVF.

‘I’ve such a phobia of needles that this really worried me,’ said Helen.

One of the eggs was successfully fertilised as a part of the treatment, but the couple was then devastated by another ectopic pregnancy.

Helen said: ‘The bleeding started when we were on a mini city break in Poland but that day we’d gone to Auschwitz. It was all so horribly depressing.

‘The nurses at the IVF clinic knew me by now and my history and this time I had keyhole surgery for the ectopic pregnancy and lost my other fallopian tube.’

Thankfully, in their case, the fourth time was the charm.

‘Two eggs were collected but only one could be transferred,’ Helen said.

‘At seven weeks we got the news that the egg had split – twins! How lucky were we? Two for the price of one.

‘But I couldn’t enjoy it. I was constantly worried something would go wrong. I was told from the start that this was a higher risk pregnancy.

‘The girls shared a placenta. I was scanned every two weeks and had brilliant care at the University of Wales Hospital in Cardiff but every time I asked: “Is there a heartbeat?” I was just so worried.’

‘It wasn’t until I had my babies in my arms that I started to relax,’ she added.

‘It was a mixture of relief and pure joy.

‘I had my beautiful babies on the Friday and we were home on the Monday, and it felt like we were just left to get on with it.

‘In those first six months, I really did not cope very well. We couldn’t see anyone and did not have the physical support of family.

‘Just asking someone to watch the babies when you have a shower or go to the loo – simple things. I really missed human contact – it was a tough time.’

‘Now we feel we have come out the other side,’ she added. ‘The girls are walking and talking, and we’re enjoying every single moment.

‘They’re real characters. Even though they’re identical they have their own personalities. Bella is very cheeky and independent while Sofia is much more cwtchy.’

Get in touch by emailing [email protected]


MORE : The truth about taking antidepressants while pregnant: Is it safe?

MORE : What it feels like to give birth during the midwife crisis

MORE : Couple travel the world for 300 days with baby they welcomed in lockdown