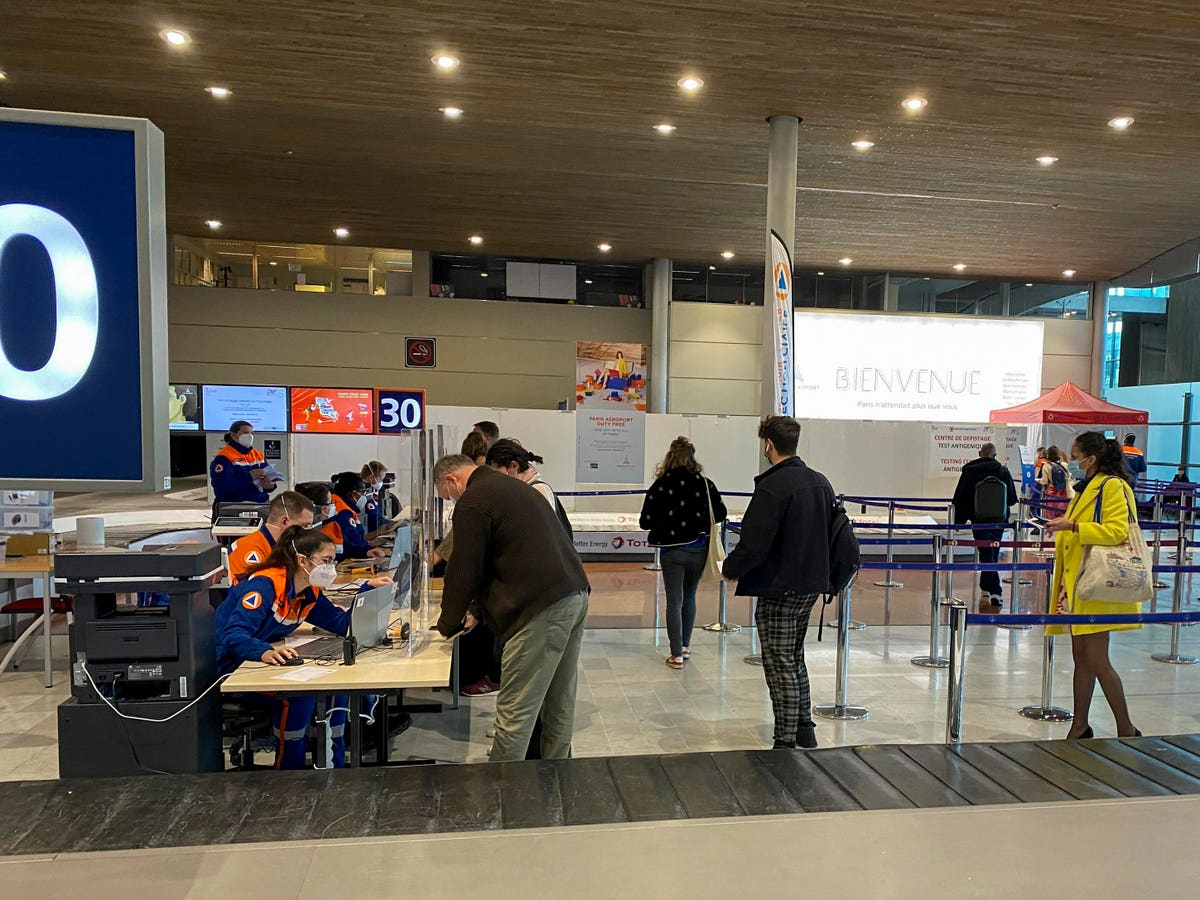 The Covid-19 coronavirus moves pretty fast. If you don’t stop and look around once in a while, you could miss it.

That’s not exactly what Ferris Bueller said in the movie Ferris Bueller’s Day Off. But it does apply to the severe acute respiratory syndrome coronavirus 2 (SARS-CoV-2). Less than three weeks after the Biden Administration had lifted most pandemic-related border restrictions, the emergence of the “highly mutated” Omicron variant of the SARS-CoV-2 has prompted the U.S. to reimpose travel restrictions for eight countries in southern Africa. Starting Monday, non-U.S. citizens will not be able to travel from South Africa, Botswana, Zimbabwe, Namibia, Lesotho, Eswatini, Mozambique and Malawi. The U.S. government is now one of multiple governments trying to prevent the Omicron variant from digging its spikes into their countries. Welcome to yet another “yo” in what’s becoming a “yo-yo” for travelers.

As I described on Thursday for Forbes, this new variant, which before today was known just as the not-so-easy-to-remember B.1.1.529 variant, has over 50 different mutations with over 30 changes to the spike protein compared to the original version of the virus. The large number of mutations has led people to call this a “highly mutated” or a “heavily mutated” or a “oh-geez-not-another-Delta-esque-variant-when-I-mistakenly-acted-as-if-the-pandemic-were-over” variant. The jury is still out on whether the B.1.1.529 variant will be as troublesome as or even more troublesome than the Delta one. Regardless, the World Health Organization (WHO) has now named this variant the Omicron variant and designated it as a variant of concern:

This variant has been spreading rapidly in South Africa over the past couple of weeks. And as we’ve seen time and time again, the Covid-19 coronavirus doesn’t behave like that wild weekend spent in Las Vegas that involved candles, leather masks, handcuffs, lobster ice cream, and an ox. What happens in one location doesn’t necessarily stay in that location when it comes to the SARS-CoV-2. The Omicron variant may have already spread well beyond the southern African region. There have already been reports of this variant being detected among people in Hong Kong, Belgium, and Israel who had recently traveled in different parts of Africa.

One example was a vaccinated person who returned to Israel from Malawi, as the Times of Israel reported. Marc Van Ranst, MD, PhD, a Professor of Virology at the Katholieke Universiteit Leuven in Belgium, tweeted about another example in Belgium:

These may just be the tip of the Iceberg lettuce, so to speak. Unless you already have very aggressive and comprehensive routine Covid-19 coronavirus testing, it would be difficult to follow the complex salad of transmission that may already be occurring in your country. Without a good routine surveillance system in place, the detection of a case can be like your significant other telling you, “honey, we have to talk.” You could be well behind the eight ball by the time alarms are sounded. For every reported case, there could be a bunch of other unreported cases running around. Or walking around. Or texting around.

Therefore, swift action will be needed if there’s any hope of containing this new variant. Or at least slowing its spread until scientists can determine how much of a threat the Omicron variant may be and what should be done. That’s why European Commission President Ursula von der Leyen tweeted the following:

As Euronews reported, Germany, Italy, and France have already announced restrictions on air travel from the southern African region with the Netherlands poised to follow suit.

These European Union (EU) countries haven’t been the only ones to increase travel restrictions. The U.K., which is not longer part of the EU due to that whole “Brexit” thing, has temporary halted flights from South Africa, Namibia, Lesotho, Eswatini, Zimbabwe and Botswana. Israel has placed these six countries along with Mozambique on its “red countries” list. Foreign nationals from such “red countries” will not be allowed to visit Israel, and Israelis will not be allowed to visit such “red countries.” And this afternoon, the U.S. announced the upcoming eight country travel restriction. Expect other countries around the world to soon do something similar as well.

The Biden Administration’s decision to lift international travel restrictions earlier this months for visitors who are vaccinated was risky. As of November 24, only about 59% of the U.S. population has been fully vaccinated. Many Americans have not been following face mask and social distancing recommendations. Even though the Delta variant surge from the Summer seemed to be subsiding in October, the U.S. had never really gotten the Covid-19 coronavirus under control.

Plus, the country was heading into the Winter months when colder and drier weather, indoor Holiday gatherings, and Holiday travel could be perfect storms to drive up Covid-19 coronavirus transmission again. All of this left the U.S. rather open to being engulfed by the Covid-19 coronavirus again like a hot dog in a bun factory. So the recent upswing in Covid-19 cases in the U.S. hasn’t been that surprising, as I described for Forbes on November 22. And that was even before things got “highly mutated.”

Such a more progressive approach could have helped businesses and the general public aim for different milestones and better understand the scientific rational behind different Covid-19 restrictions. It could also make it much easier to dial back to slightly more stringent precautions whenever upticks in virus activity occur. This could have made the travel situation more of a “yo, that makes scientific sense” situation rather than a “yo-yo” one.

Instead, throughout this pandemic, many decision makers in the U.S. have alternated between being too late with Covid-19 precautions and being too premature in relaxing such precautions. For example, 2020 was chock full of policy makers ignoring warning signs, not acting quickly enough, and prematurely declaring the pandemic as under control. As time eventually showed, the pandemic was about as under control as an all-cat version of Dancing with the Stars.

As another example, in mid-May of 2021, the Centers for Disease Control and Prevention (CDC) changed their guidelines so that those fully vaccinated no longer needed to wear face masks while indoors in public. As I covered back then for Forbes, this seemed like a premature relaxation since the U.S. hadn’t yet achieved high enough vaccination coverages to really interrupt transmission of the virus and businesses had no real way of confirming whether people were fully vaccinated. As a result, many people both vaccinated and unvaccinated ditched face mask use, which made it much more difficult to re-institute face mask use when the Delta variant began spreading and caused a Covid-19 surge in the Summer. As you know (or maybe you don’t know), anything premature can leave things very messy and people very confused.

A better approach would have been to convey to businesses and the public the thresholds needed to relax face mask use. This could have further motivated everyone to push each other to achieve such thresholds.

Such a situation also leaves the country much more vulnerable when nature inevitably throws another curve ball. As the Omicron variant is showing, the virus is not going to announce on Instagram or Twitter whenever it’s preparing for a new variant to arrive. The virus doesn’t go on Jimmy Kimmel Live and say, “I’m really excited about this new variant to be released in November with all these mutations. By the way, where is Matt Damon?” This isn’t like a new Marvel series that only emerges after a bunch of previews, trailers, and other promos have been dropped. No, the virus is more like that person who justifies his or her cheating after the fact, essentially saying, “yeah, you should have paid more attention before.”

So, it’s a good idea to put a pause on non-essential travel for the next few months if you can. Keep your travel plans for the upcoming Winter months as flexible as possible. It’s not clear yet how much of a problem this new Omicron variant may be. So keep up-to-date on the latest news and be prepared to adapt. After all, the Covid-19 coronavirus can move pretty fast. If you don’t stop and look around once in a while, you could catch it.