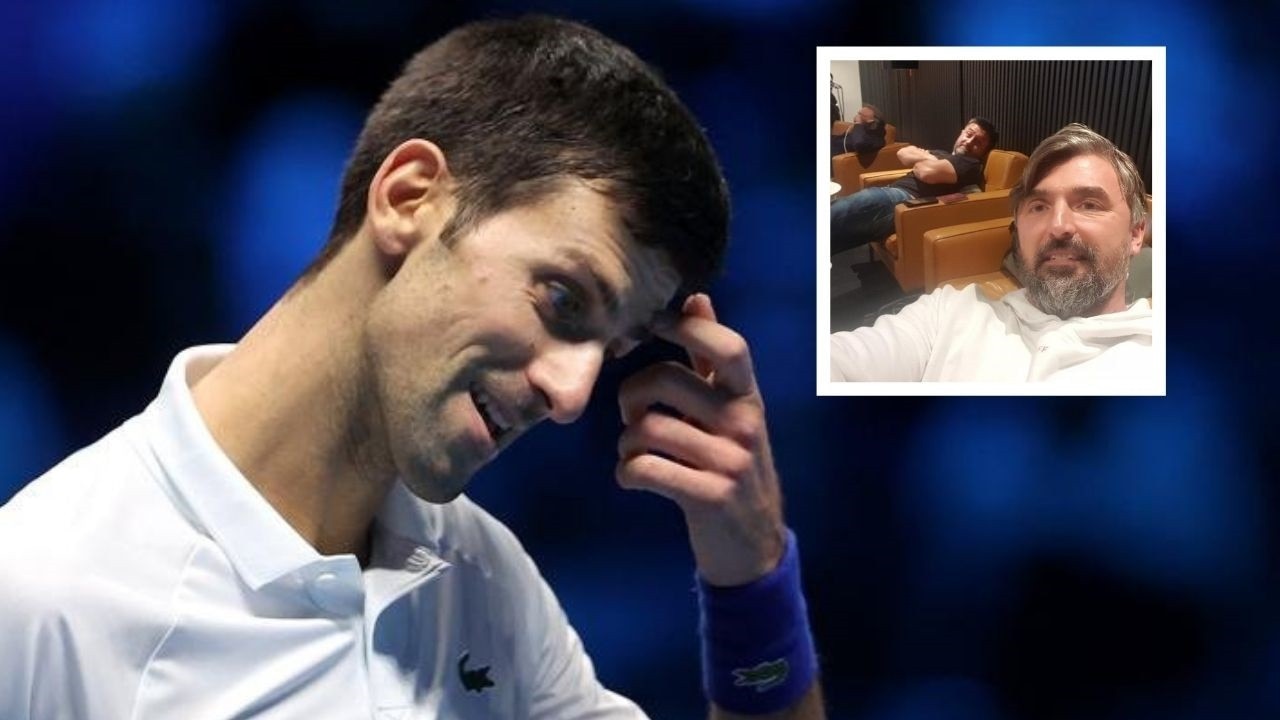 Novak Djokovic’s team has released a photo as the tennis star waits in limbo, held under police guard in isolation in Melbourne.

Novak Djokovic’s coach stated the obvious with an Instagram post early on Thursday morning as the tennis star’s entry into Australia was left in limbo because of a reported visa complication.

The world No. 1 — who has spoken publicly about his opposition to vaccinations — revealed on Tuesday he had been granted an exemption to compete in this month’s Australian Open, where all players are required to be double jabbed.

But there was massive drama when he touched down at Melbourne’s Tullamarine Airport, with reports authorities were questioning elements of his paperwork before allowing him into the country.

Djokovic’s father Srdjan reportedly told a Serbian radio station his son was “isolated in a room” at the airport without his entourage or mobile phone.

“Novak is currently in a room which no one can enter,” Srdjan Djokovic, told the B92 internet portal. “In front of the room are two policemen.”

The tennis star’s coach, Goran Ivanisevic, posted a photo to social media featuring himself and two members of Djokovic’s entourage, showing glimpses of a smile.

“Not the most usual trip Down Under,” he captioned the picture.

Late on Wednesday night the Victorian Government said it was rejecting Djokovic’s entry because he was on a work visa which requires the support of the state government.

Acting Sports and Major Events Minister Jaala Pulford tweeted at 11.14pm that the Victorian Government would not support Djokovic’s application.

“The Federal Government has asked if we will support Novak Djokovic’s visa application to enter Australia,” she said.

“We will not be providing Novak Djokovic with individual visa application support to participate in the 2022 Australian Open Grand Slam.

“We’ve always been clear on two points: visa approvals are a matter for the Federal Government, and medical exemptions a matter for doctors.”

A federal government source told The Age there were issues regarding the documentation required to prove the reason for Djokovic’s exemption, which is required from unvaccinated people.

Australia reacted with disgust to news the nine-time champion at Melbourne Park had been granted a vaccination exemption to play in the tournament starting on January 17.

And despite months of claims from Victorian government officials Djokovic wouldn’t be able to play without being fully vaccinated, the Serbian — an outspoken anti-vaxxer — revealed he had been granted permission to compete in the grand slam.

Home Affairs Minister Karen Andrews released a statement on Wednesday and Prime Minister Scott Morrison made remarks appearing to imply Djokovic was not yet in the clear.

The Prime Minister was asked by reporters on Wednesday afternoon if he personally supported the decision to grant Djokovic an exemption. He warned the tennis star could find himself “on the next plane home” if he can’t provide sufficient evidence as to why he is unable to be vaccinated.

“My view is that any individual seeking to enter Australia must comply with our border requirements,” Morrison said.

“Now when Novak Djokovic arrives in Australia — I’m not quite sure when he’s going to turn up but I don’t think it’s too far away — he has to because if he’s not vaccinated, he must provide acceptable proof that he cannot be vaccinated for medical reasons and be able to access the same travel arrangements as fully vaccinated travellers.

“So we await his presentation and what evidence he provides to support that.

“If that evidence is insufficient, then he won’t be treated any different to anyone else and he’ll be on the next plane home. So there should be no special rules for Novak Djokovic at all. None whatsoever. And so if medical exemptions have been provided by medical professionals and that’s been furnished to him as a proviso for him to get on that plane, well, that will have to stack up when he arrives in Australia.

Andrews’ statement earlier in the afternoon didn’t mention the 20-time major winner by name but there was no doubt who the statement was referring to.

“Any individual seeking to enter Australia must comply with our strict border requirements,” her statement read.

“Since 15 December 2021 fully vaccinated eligible visa holders can travel to Australia without needing to apply for a travel exemption, and enter eligible states and territories quarantine free.

“If an arriving individual is not vaccinated, they must provide acceptable proof that they cannot be vaccinated for medical reasons to be able to access the same travel arrangement as fully vaccinated travellers.

“Australian Border Force will continue to ensure that those who arrive at our border comply with our strict border requirements.

“No individual competing at the Australian Open will be afforded any special treatment. Quarantine requirements for international arrivals in Victoria, including for non-vaccinated individuals, are a matter for the Victorian Government.”