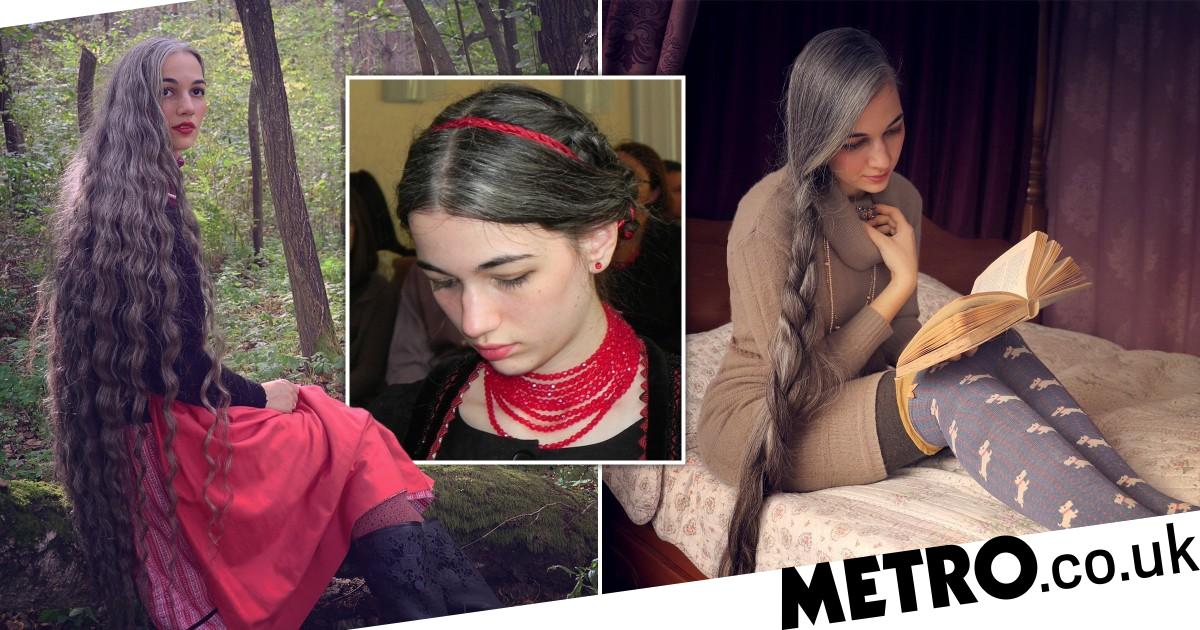 A woman dubbed as a ‘real-life Rapunzel’ has shared how she’s embraced her grey locks by growing them five feet long.

However Anna Shepherd, from Hungary, recalls how things were tough for her as a child – as she was bullied by other kids when she started going grey at 13.

The 30-year-old stresses that she was often called names such as ‘Cruella’ – echoing the white and black-haired villain in Disney’s 101 Dalmatians.

Anna, who now works as a farmer, said: ‘I begged my mother to let me dye my hair when I began going grey. I was so sad and worried that I would look old.

‘I felt extremely self-conscious all the time. People would stare at my strands of grey hair and I would get remarks about it.

‘I remember this incident when a boy called me Cruella and it did hurt my feelings.’

But, over time, Anna learned to love her hair and says it has now become ‘an extension of herself.’

Now, she’s embracing her greys and – taking inspiration from folklore – is continuing to grow her hair out.

She also only washes her hair once a month, claiming that’s the best way to keep it in check – and can go for weeks without brushing it.

Anna says: ‘The last time I had a proper haircut was when I was 14 years old. I went to the hairdresser and asked for a trim but the hairdresser chopped off far too much.

‘Since then I have never been back to the hairdresser. If I ever need to, I just ask my mother to give me a trim but that’s only once in a few years.

‘It may partly be genetics, but I only wash my hair once a month because that’s how it behaves best.

‘And I don’t apply anything to my hair except some oil after I wash it to tame it and keep it manageable.

‘It’s honestly easier having long hair on the farm because you don’t have to style it and you can put it up in a bun.

‘Sometimes when I’m doing a lot of physical work on the farm, I can go for a week without brushing it and it’s fine.’

Now, with more than 16,000 followers on Instagram (@prettyshepherd), Anna hopes to help women all over the world embrace their grey.

She adds: ‘I used to get picked on or get stared at for my grey hair but now I only get compliments.

‘I feel honoured when women write to me saying that they’ve found the courage to go grey because of me. It fills my heart with happiness.

‘There’s definitely a stigma with a young woman having grey hair and I would love to help change that.’


MORE : Toddler shaves half his hair off after finding dad’s beard trimmer


MORE : A guide to ‘bixie’ hair – the trend that’s everywhere at the moment