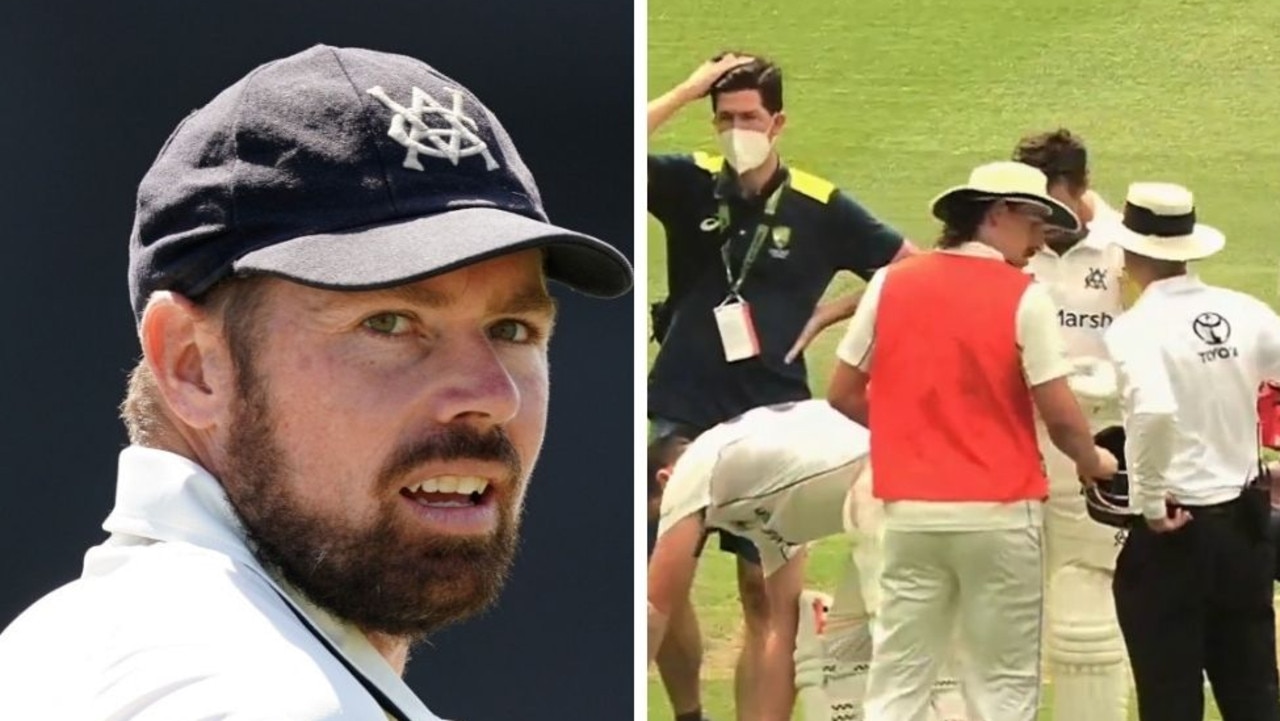 A scary moment at the MCG brought Victoria’s first innings to a grinding halt, capping off a disappointing morning for the side.

Victoria’s first innings has ended prematurely on 9-313 after Jon Holland was smashed on the helmet by NSW quick Liam Hatcher.

In a scary moment for Holland midway through the first session on day two, he misjudged a Hatcher short ball and his head copped the full brunt of the delivery.

After Holland was assessed for a few minutes out on the ground by medical staff, Bushrangers captain Peter Handscomb decided to declare the innings closed, rather than put Holland at any unnecessary risk.

Holland became the third Bushranger to be hit in the head in this match, with James Seymour (twice) and James Pattinson also suffering the same fate.

It capped off a disappointing morning for Victoria at the MCG, as they lost 3-30.

The Blues have fought back into this contest superbly, taking the Bushrangers’ last seven wickets for just 63 runs, with Hatcher leading the way with a career-best 4-86, and Nathan Lyon (3-63) also playing a handy role.

Will Sutherland was the only Bushranger to put up any meaningful resistance, compiling an entertaining 23, including two fours and a massive down-the-ground six off Lyon, before being dismissed by Hatcher.

Former Test batsman Nic Maddinson should prepare for a delayed start to his Big Bash campaign with an Australia A call-up, at least, likely following another blistering century for Victoria.

The swashbuckling left-hander has been a revelation against the red ball since moving south from NSW and put some of his former teammates, including Test spinner Nathan Lyon, to the sword as cricket returned to the MCG on Friday.

Battling a bowling line-up without veteran Trent Copeland, who was sent for scans on his foot after injuring himself in his third over of the Sheffield Shield clash, Maddinson powered to his 14th first class hundred, and sixth for Victoria, in imperious fashion with a boundary.

With rookie Victorian opener James Seymour (105) also notching his maiden Shield hundred, in just his fourth innings and after being struck twice on the helmet by short balls from Sean Abbott, the Vics had been in a powerful position.

But a final session collapse, including Lyon finally removing Maddinson in the minutes before stumps for 128, saw the home team drop from 2-250 to 6-283.

Cricket Australia on Friday confirmed there would be an Australian intra-squad clash in Brisbane starting December 1 as crucial preparation for the Ashes, and from which the final squad will be picked.

Maddinson, who played the last of his three Tests in 2016, could expect to be part of that match and then an Australia A team which will take on the England Lions in Brisbane from December 9, the match running concurrently with the first Ashes test at the Gabba.

“I’m playing Shield cricket because I want to play Test cricket again, that’s the motivation for sure,” Maddinson said after his innings.

After making 87, with four sixes, against NSW last week, Maddinson, 29, is averaging 108 through three innings after a delayed start to this domestic season, having been the leading run-scorer in the Shield in the 2019-20 season

Prospective Test opener Marcus Harris was out for just one earlier in the day after Victoria was sent in.,

But having made 137 against NSW last week in a mammoth 361-ball innings, he was confident Test selection would be based on a “body of work” and not individual scores, knowing he has a few runs in the bank to lean on as Ashes selection D-Day draws closer.

Harris, who was out edging Liam Hatcher to slip in the sixth over, is a certainty to be part of an extended Test squad that will assemble towards the end of November to begin preparations for the Ashes.

“I had a really good conversation with George Bailey probably a week ago,” Harris said this week.

“I sort of know where I stand and what needs to happen and what I need to do.

“I think (selection is) probably going to be more (based) on a body of work rather than a couple of Shield games at the start of the season.”

Before the match NSW keeper Peter Nevill said it was hard to see a weakness in Harris’ game during his massive innings last week, and he was the frontrunner to partner Warner in the opening Test.

“He‘s obviously had a very good off-season in England as well. He’s been churning out the runs for a long period of time,” Nevill said.

“If they need an opener to partner with David Warner for the first Test, I’m sure he’s well and truly in the frame.

“He seems to be the front runner for mine.”