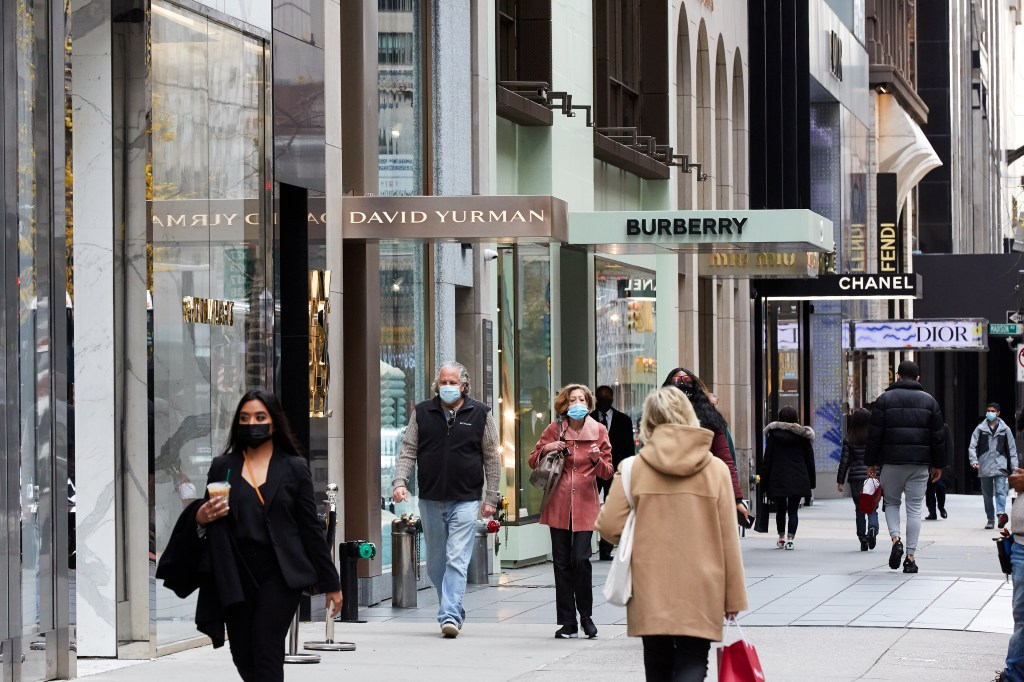 While far from the frenzied rush of pre-COVID-19 years, Black Friday shopping crowds were still big enough to sustain expectations for healthy holiday sales gains in the high single digits.

At Macy’s Herald Square in Manhattan, there was a line outside the store before it opened at 6 a.m. on Friday, “The first two hours were great. It started out strong, but that doesn’t necessarily mean it ends up strong,” said Macy’s Inc. chairman and chief executive officer Jeff Gennette, in an interview at 9 a.m. Friday.

“From noon to one, and one to two, are our two most potent hours. After two, it tapers off by late afternoon, and then there is another rush at night,” said Gennette.

On Thursday, Macy’s kept its stores closed, as it did last year during COVID-19, pushing store traffic into Friday. “Online was strong Thursday and it has started out fine today,” Gennette said. Macy’s did hold its iconic Thanksgiving Day parade in real life, however, which drew enthusiastic crowds.

While doorbusters were less present at stores on Friday, there was accelerated discounting on certain key items in good supply, also spurring business.

“The promotional pace clearly took a jump up beginning on Wednesday,” observed Craig Johnson, president of Customer Growth Partners. “It’s an urban myth that no one is discounting anymore. They are but not as dramatically.” Johnson singled out the outlets as getting particularly strong traffic Black Friday, in part due to Thursday’s closings, and people, teens in particular, anxious to get out and socialize as they shopped.

Rob Garf, vice president and general manager of retail at Salesforce, had a somewhat different opinion. “Consumers may not be winning the game of discount chicken this year. With product still stuck in ports and margins being squeezed, consumers looking for deep discounts are going to be disappointed,” he said. “The average discounts over the first few days of Cyber Week [the week leading up to Cyber Monday] are down 8 percent compared to last year. We are on track for record online sales during Cyber Week. That said, with people getting back into physical stores and making purchases earlier in the holiday season, demand is smoothing out beyond the typical peak shopping days.”

Salesforce said that as of 12 p.m. Friday, U.S. shoppers spent $5.8 billion, or 7 percent more than last year, and projected $12.9 billion would be spend on Black Friday, representing flat growth year-over-year. Salesforce also reported that $6.9 billion was spent online in the U.S. on Thanksgiving Day, up 1 percent year-over-year.

Black Friday turnouts at retailers might have been stymied for a few reasons. On the West Coast there were “smash and grab” thefts this week, hitting Nordstrom and Louis Vuitton, among other stores.

Also, reports on Friday of a new South African COVID-19 variant, if not actually deterring shopping activity, did dampen the mood on the day. The news had the Dow Jones Industrial Average tumbling 900 to 1,000 points midday and sparked worries about the impact on holiday shopping ahead and the economy, if the variant spreads.

Furthermore, shoppers have been buying gifts earlier this season due to fears of supply chain shortages and responding to retailers unleashing holiday campaigns and Black Friday deals earlier than ever this year, siphoning some shopping from Black Friday and likely other key shopping days ahead.

Purchasing seems more “surgical” for holiday 2021. Consumers, while more inclined to visit stores this season, are more closely following their shopping lists and do look to get what they want quickly as inventories run out, and to limit their risk of contracting COVID-19.

“Consumers are holiday shopping and spending this Black Friday,” said Steve Sadove, senior adviser for Mastercard and former CEO and chairman of Saks Inc. “Shoppers are eager to get out for doorbusters and are reinforcing the need for omnichannel offerings as both in-store and online sales experience strong consumer demand.”

Cowen forecasts a robust holiday sales increase of 11 to 13 percent this year, versus an 8.3 percent increase last year. Store traffic should increase 70 to 90 percent, which implies being down 20 to 30 percent from 2019 levels.

“Product themes include a robust denim cycle, going-out apparel inclusive of dresses and outerwear/sweaters, investing in face and hair through beauty and fragrances, cozy sweaters/jackets, toys/home, and giving things to both yourself and others. Comfort, athletic leisure, and tailored clothes with comfort and technology also remain important trends,” Cowen reported.

Regarding discounts, “During our mall and off-mall store checks, we observed the lowest level of clearance goods in five years or more, which we believe is fueled by consumer demand, supply constraints, a new apparel and going-out cycle, and strong momentum for both gift giving and receiving,” Cowen indicated.

According to Johnson, “It was a good start to the holiday season. Super Saturday will still be the biggest day of the season, but I think Black Friday will run a close second.”

In accessories, Gennette said Polo Ralph Lauren was hot in every category — men’s, women’s and kids; Ugg is Macy’s top footwear brand while Steve Madden, Michael Kors and Inc. were also strong in footwear; gift sets in fragrances and beauty are “a big win.” He also cited family pajamas, cashmere under the Macy’s and Bloomingdale’s labels; luxury fragrances at Macy’s, and luxury brands in fragrances and other areas at Bloomingdale’s; outerwear from Kors and Guess; toys from Toys “R” Us, and jewelry at all price points, from fashion to fine jewelry.

Asked if the recent uptick in tourism has closed any of the gap between how urban stores are performing versus suburban stores, which are performing better, Gennette said, “Not yet but we are starting to see European travelers at Bloomingdale’s but certainly not at 2019 levels. Bloomingdale’s 59th Street and SoHo are getting better, but we don’t see a big difference in office workers downtown. That will be a tailwind phasing in in 2022.”

“Supply chain is not going to be an issue with Macy’s Inc.,” said Gennette. “We are in good shape for gifting. We have 20 percent more inventory for the fourth quarter than we did in 2020, but overall base, we are running with leaner inventories.”

For the full holiday shopping season — Nov. 1 to Dec. 31 — Adobe predicts that online sales will hit $207 billion, a 10 percent increase year-over-year and a new record.

“Today, consumers will see deeper discounts and more items in stock as retailers release their best deals of the season. Popular products including computers, apparel, appliances and sporting goods are already seeing strong discounts this morning, so today is an excellent day to dig in on your holiday shopping,” said Taylor Schreiner, director of Adobe Digital Insights, in a statement Friday.

According to Adobe, on Thanksgiving the prevalence of out-of-stock messages dropped to the lowest levels since June, as retailers became deliberate with their marketing efforts to drive consumers to products that are in stock.

Saturday is “Small Business Saturday.” According to Adobe, the best deals on the day will be electronics and appliances. “Sunday will see heavy discounts for sporting goods and apparel, while Cyber Monday will offer the biggest price drops on TVs,” Adobe indicated.

Globally, $30.7 billion was spent online on Thanksgiving, representing a 1 percent increase year-over-year, and $62.8 billion is expected to be spent online during Black Friday, which would be flat against last year. Salesforce said it analyzed global shopping data from more than one billion consumers on Commerce Cloud and Marketing Cloud, including 24 of the top 30 U.S. online retailers.