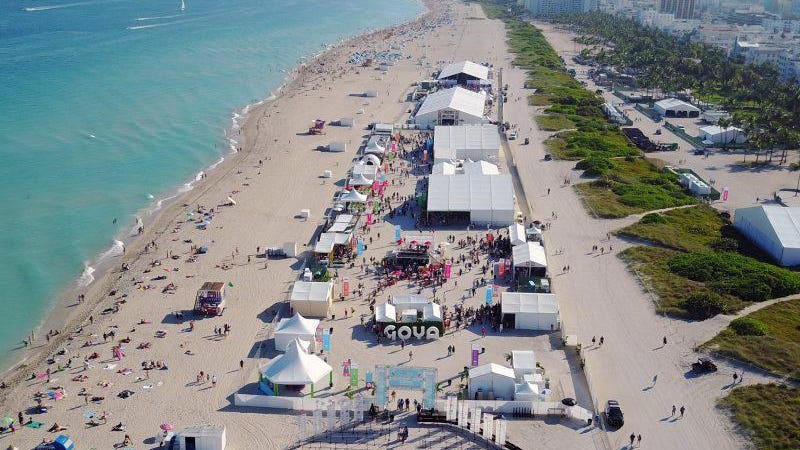 The Food Network & Cooking Channel South Beach Wine & Food Festival Presented by Capital One (SOBEWFF®) is gearing up for its 21st year with a star-studded lineup featuring Food Network & Cooking Channel personalities and more than 400 chefs and wine and spirit producers. These talented chefs and stars are coming together for a weekend of food and booze-filled events consisting of walk-around tastings, intimate dinners, late-night parties, brunches, lunches, master classes, wine seminars and more. Widely recognized as one of the country’s largest and most popular, the four-day Festival returns to the sand February 24 to 27, 2022 with 90+ events spanning Miami-Dade and Broward counties.

“We’re looking forward to being back. The last two years have been so hard for the world and producing a festival during a global pandemic is no easy feat, but we knew we had to find a way to returncomfortably and safely,” says Lee Brian Schrager, founder of SOBEWFF®. “Last year, we were able to host the Festival in May and it was tough, but we’re excited to get back to championing the great food of South Florida and beyond during our usual February weekend.”

In an effort to allow guests an option for more intimate events (in case they’re hoping to stay away from crowds), there will be a larger lineup of Festival’s Master Classes being taught by some of Miami’s top culinary talent. Choose from a variety of classes such as Craft Cocktail Making at Sweet Liberty, a Pasta Making Class and Lunch with Michael Pirolo, Bread Making with Sullivan Street Bakery, Ramen Making with InRamen, a Spice Making Class with Adeena Sussman—just to name a few.

Master Classes aren’t the only thing set to shine this year—the Festival will also feature a list of popular celebrities who have founded their own brands in recent years. “This year we are bringing back all the greats that we know our guests look forward to and then we’re having some fan favorites from pop culture join us. Recognizable faces that have made their way into the culinary and hospitality world like Kate Hudson, Eva Longoria, and Adam Levine and his wife, Behati Prinsloo—all hosting events and sharing their new brands with us. It’s going to be a fun addition,” shared Schrager.

Considering making your way to this year’s SOBEWFF®? For first timers, Schrager suggests attending the Goya Foods’ Grand Tasting Village and at least one signature evening event to really get a taste of what the Festival is all about. For those who are ready to dive in and make the most of it, here are some of SOBEWFF® founder’s favorite picks for 2022:

Adam Levine and Behati Prinsloo are ready to take golden hour to the next level. The Maroon 5 frontman and wife, former Victoria Secret Model, Behati Prinsloo are the co-founders of Calirosa Tequila, whose blanco tequila brims with a vibrant, fruity flavor and warm, rosy hue. This spirit-forward party, hosted by the celebrity couple will kick off the Festival at 1 Beach Club, the Tulum-inspired, members-only retreat tucked behind the 1 Hotel South Beach. The evening’s centerpiece will be Calirosa’s trio of tequilas (the honeyed, dark berry-flavored Rosa Blanco; the cinnamon and caramel-rich Añejo; and the deep, amber-colored Extra Añejo) all of which have been crafted in partnership with the Real family, who has owned and operated their Jalisco-based distillery, Tequila Selecto de Amatitán, for nearly 80 years. Complemented by fresh and flavorful canapés from 1 Hotel South Beach’s ace culinary team, this star-studded party will be picture perfect. No filter needed, of course. Find tickets here.

Welcome to Flavortown! All the rumors are true, Diners, Drive-Ins, and Dives, a favorite Food Network show, is coming to the sands of South Beach for one-night-only. With roadside diners, vintage drive-ins, and out-of-the-way dives, foodies are welcomed to have a taste of Guy Fieri’s travels across America in search of some of the best greasy spoon eateries featured on the hit show. Fieri is no stranger to hosting the Festival’s most iconic celebrations and in honor of its 21st year, he’s back on the beach alongside some of America’s local favorite food joints to form a collective of 25+ restaurants to create their mouth-watering creations on the beach. This event will take place in the North Venue tent. Tickets available here.

All birthdays are important, but some milestones should be celebrated with a little something extra. When most turn 21, they want to ring in the day with a sip of a fancy cocktail or party, but on the sand at SOBEWFF®, they are popping bottles and indulging the sweeter things in life. This late-night party will overflow with desserts and libations at The National Hotel. Spend time under the stars savoring endless indulgences from the delectable cakes and gooey cookies to confectionery creations and luscious ice cream. Sample sweets from more than a dozen South Florida dessert destinations and sip on palate-cleansing spirits from the Southern Glazer’s Wine & Spirits portfolio. Grab tickets here.

Travel from South Beach to the South of France with Château d’Esclans. The Festival and the team from Château d’Esclans, the magical estate situated in the heart of Provence, will transport you to St. Tropez and bring to life la vie en rosé amidst the casual elegance of the W South Beach. No matter what shade of pink is your preference, everyone’s palate will be pleased with an array of offerings including free-flowing sips from the world’s most glamorous rosé, Whispering Angel. Dance the afternoon away to the tunes of French DJs as the sun sets during this evening soirée accented by fresh hors d’oeuvre from the resort’s rich culinary scene inspired by the chic beach clubs in the South of France. Whether you choose to come in your haute couture, or your best South Beach attire, there’s no missing this chic #RoseAllDay experience. Get your tickets here.

This year, the Festival is honored to pay tribute to the outstanding accomplishments of the culinary community’s beloved and iconic Guy Fieri, along with Bill and Peter Deutsch of Deutsch Family Wine & Spirits. The Tribute Dinner, hosted by Master of Ceremonies and Festival favorite Rachael Ray, will be as vibrant as the careers of these three hospitality pioneers, and will include distinct touches designed to pay homage to both Guy Fieri’s wit and Bill and Peter Deutsch’s family flair. Among the evening’s highlights will be a LIVE Auction led by celebrity auctioneer, Food Network and Cooking Channel star Jeff Mauro, featuring once-in-a-lifetime travel and dining experiences available for bidding. Tribute Dinner attendees will also have access to Guy Fieri’s Late Night After Party hosted by Rev Run, taking place immediately after the dinner. Tickets available here.

It’s a knockdown, drag-out brunch returning to SOBEWFF® with Kalen Allen, social media star turned TV personality on The Ellen DeGeneres Show, as the host of this extravagant affair. Rocco Carulli, chef/owner of R House in Wynwood, home to one of Miami’s most beloved drag brunches, will curate a mind-blowing lineup of some of South Florida’s most popular drag performers to steal the show, as guests indulge in dishes prepared by some of the most creative chefs in Miami. Mistresses of Ceremonies Kim Chi, runner-up of season eight of RuPaul’s Drag Race, and Athena Dion, one of Miami’s most beloved drag queens will join in on the fun. Guests will sip on bottomless wine and cocktails while enjoying performances from some of the talent influencing the event’s cuisine. Snag tickets here.