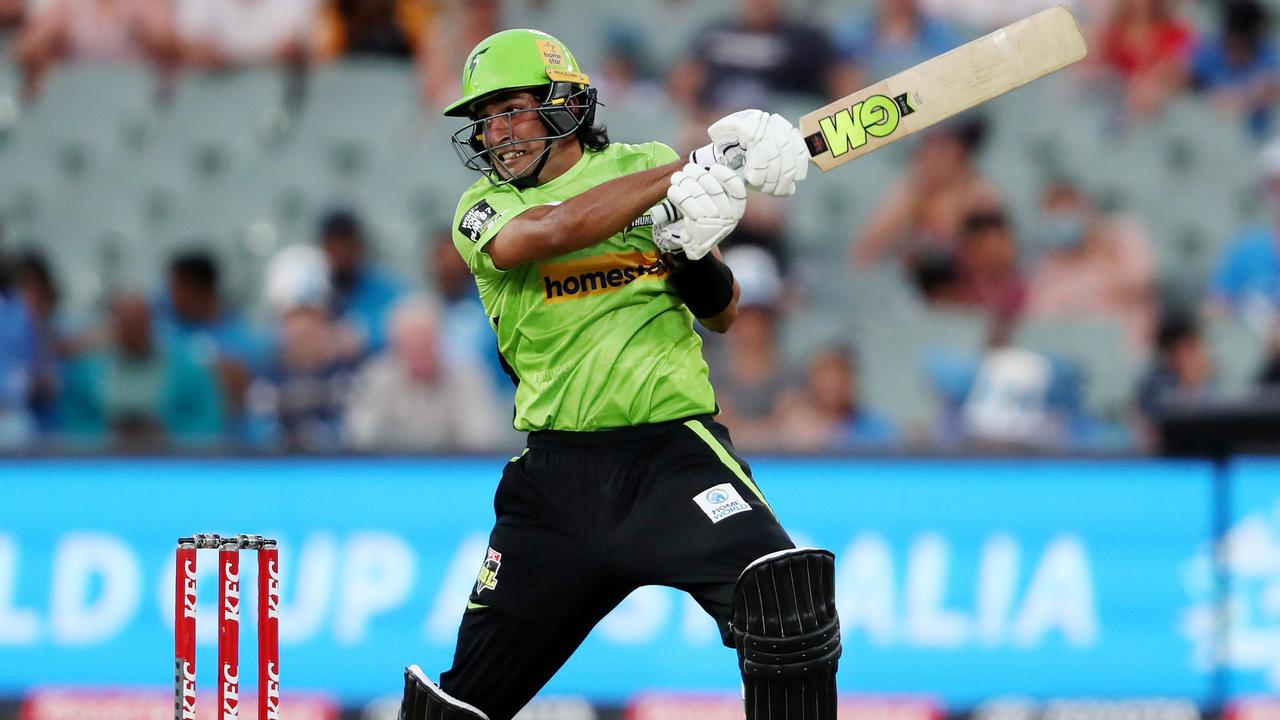 The Sydney Thunder are 5-163 from 19 overs after winning the toss and batting first against the Adelaide Strikers at Sydney Showground, with Matthew Gilkes (85*) and Chris Green (4*) at the crease.

“This is one of Gilkes’ greatest knocks in BBL,” Isa Guha said after a brilliant ramp shot to take him to 84.

“The feature for Matty Gilkes tonight was his shots down the ground,” Brad Haddin said on Fox Cricket.

“He has taken Fawad Ahmed on straight and when he is playing his best cricket he hits straight at the sight screen. We have seen that a couple of times tonight.”

Ben Cutting was first man out caught by Jono Wells off Wes Agar, but not before belting 34 from 25 balls, including three fours and two sixes after again being moved to opener.

Brett Lee backed the decision to promote Ben Cutting to the top of the order again after he got his side off to a flyer.

“This is why I like Ben Cutting at the top of the order because he puts the pressure back on the bowlers from the start,” Lee said after the Thunder star launched a massive six.

“Bang! He has thrown the whole kitchen at that one.”

Jason Sangha couldn’t repeat his heroics from the two sides’ previous match with Rashid Khan getting him caught by Fawad Ahmed for six.

“The young buck took it to him the other night, but he is a class act and has bounced back to get his man.”

Sam Billings fell for a trap from Strikers skipper Peter Siddle to be caught by Thomas Kelly for 11 as the Thunder innings stalled.

Young gun Oliver Davies was trapped by a superb yorker from Siddle to be out for 14 from 12 balls including two fours.

“That is absolutely plumb,” Lee said.

Siddle outdid himself when he bowled Daniel Sams for one with a near identical ball to put him on a hat-trick.

The fourth placed Thunder will have an eye on third spot and cementing their place in the top four, while the seventh placed Strikers will be desperate for just their second win of the season to keep their slim finals hopes alive.

The Thunder beat the Strikers in both teams last clash on new year’s eve.

Sangha is coming off a 91 not out and will be the batter to watch with Ben Cutting for the Thunder, while Daniel Sams and skipper Chris Green will lead the charge with the ball.

LISTEN TO THE LATEST FOX CRICKET PODCAST IN THE PLAYER BELOW OR SUBSCRIBE IN ITUNES OR SPOTIFY! Can’t see the player?Tap here

For the Strikers Jake Weatherald and Matt Short will be the danger men with the bat, while Daniel Worrall and skipper Peter Siddle will be the key men in the bowling attack.

It sets the scene for an intriguing clash to wrap up a blockbuster BBL double header on Saturday night.

16 PLAYERS RULED OUT: Covid chaos ravages through three clubs, but games to go ahead