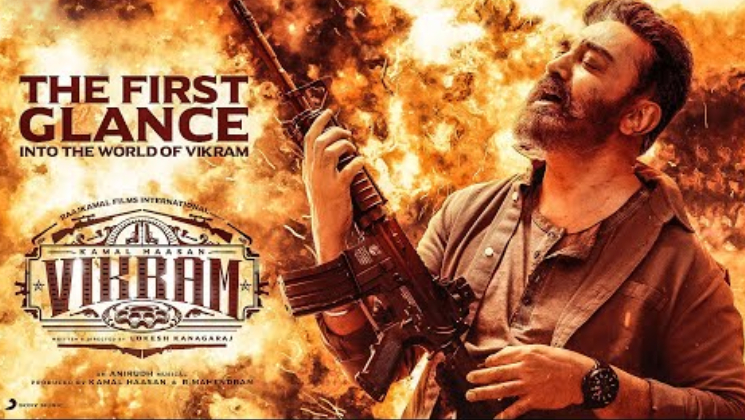 Ahead of actor Kamal Haasan’s birthday i.e on November 7, director Lokesh Kanagaraj dropped the first glance of Vikram as he wished ‘Ulaganayagan’. Sharing Vikram’s first glance, Kanagaraj wrote on Twitter, “A small gift from me to you @ikamalhaasan sir Red heart. Happy Birthday Ulaganayagan”. Kamal Haasan thanked him and also shared the teaser.

In the 48 second glimpse of Vikram, we see the versatile actor in an intense avatar as he is all set for some actions in jail. The background score is also intense that matches the action scenes and we are sure that Vikram will surely be a great actioner to watch.

Take a look at the video here.

Vikram also stars Vijay Sethupathi and Fahadh Faasil and for the first time, this trio is working together. So, the movie is really going to be a treat for all the fans out there. Kalidas Jayaram has also joined the cast of the movie. As per the reports, Kalidas will play Kamal Haasan’s son in the film.

For the unversed, the title from Kamal Haasan’s 1986 actioner of the same name. It is a spin-off featuring the RAW agent, who stopped a missile attack over 25 years ago. Vikram is backed by Kamal’s production company Raaj Kamal Films International.

Kamal Haasan had recently celebrated his birthday with his co-stars Fahadh Faasil, Lokesh Kanagaraj and others on the sets of Vikram. He got a surprise pre-birthday party with a customised cake having Kamal Haasan’s first look from Vikram on it.

Did you like Vikram’s first glance? Do let us know and for more such updates, stay tuned to this space.