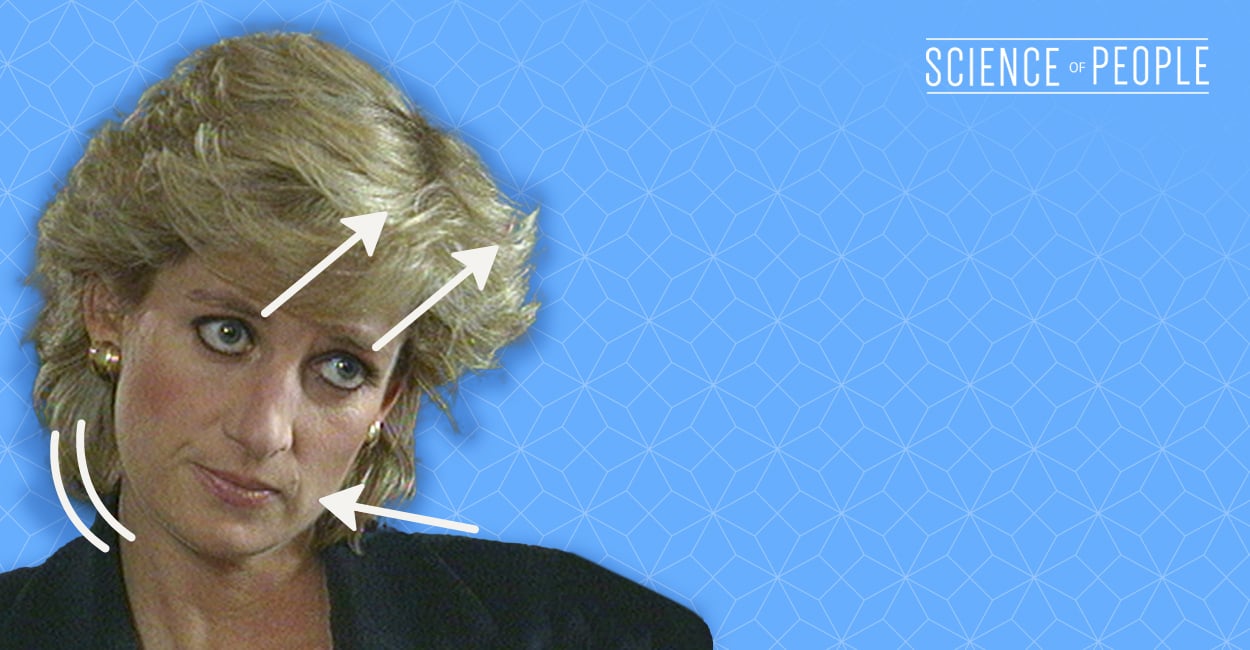 Princess Diana, known for being the first wife of Charles, Prince of Wales, and mother of Prince William and Prince Harry, captivated the hearts of the world almost immediately.

Today, we’re going to break down Princess Diana’s body language and the intriguing nonverbal cues that she sent to others.

Princess Diana had a signature nonverbal cue. She did it all the time—in her interviews, when she was walking down the street, and even while looking at photographers. She was known for tucking her chin down and looking up through her eyelashes. What does this cue mean?

The chin tuck is a protective cue. When we tuck our chin in, we protect one of the most vulnerable parts of our body: the jugular. We often do this subconsciously when we’re feeling nervous, shy, ashamed, or scared.

When Princess Diana did it, however, it activated that protective instinct in us. It also made her seem very mysterious when she added the little look up through the eyelashes.

Princess Diana often took up very little space (see timestamp 2:14 of the video). She would typically roll her shoulders in and keep her arms tightly pressed to her sides. Along with that chin tuck, it almost made her look like a little girl.

Let’s take a look at an interview with Princess Diana and Prince Charles right before their wedding (timestamp 3:12). Keep in mind this is 1981—very early on in their courtship—and I want you to pay attention to Princess Diana’s body language.

Did you notice how she’s very contracted? Princess Diana’s slumped back in her chair. Her shoulders are rolled in. Her chest is even a little bit concave.

Notice as Prince Charles tells his story, Diana gets even smaller. She literally contracts even more during his story.

It makes her seem defeated even before she’s really begun her relationship. She even further contracts by tilting her ear to the top of her shoulder.

You may also notice she makes herself even smaller by engaging in a self-touch or a hand touch, which we often do as a self-soothing gesture when we’re nervous. Clearly, she was nervous right from the start of the relationship—whether on camera or with Charles (or both!), we will never know for sure.

Princess Diana’s body language might have reflected what she was feeling internally— blocked, uncomfortable, and insecure.

Contempt is a very negative microexpression. It’s the emotion of negativity, scorn, and even a little bit of superiority. Contempt is also the emotion that’s been proven to be one of the leading predictors of marital divorce.

Princess Diana was photographed a lot showing a smirk, which is that one-sided smile and a telltale sign of the contempt microexpression (read about all 7 microexpressions here).

The smirk is part of why people had a love-hate relationship with Princess Diana. They thought she was beautiful and magnetic, interesting and mysterious with those chin tucks and batting eyes.

Enter the next cue…

In one of them, you can see what she does when she’s asked a very difficult question: her nervous body language (timestamp 6:19).

In this interview, you get a unique opportunity to see a cluster of nervous tells that indicate shame, guilt, and nervousness. Her cues indicate intense negativity or shame.

In my book Cues: Master the Secret Language of Charismatic Communication, I dive into what happens to your body during intense nervousness.

Throughout the video, you can see her:

All these cues come in response to a very difficult question.

I want to compare this to a much more off-the-cuff interview, during which Prince Harry’s in the room and she’s laughing and joking. I want you to see that this literally looks like two different people (timestamp 9:45).

In this interview, you can clearly see she’s more playful, her voice tone is higher, and she even laughs very naturally! It’s a totally different tone from the interview we saw before.

In some of Princess Diana’s interviews, you might notice her volume drop. When we drop our volume, this is usually because we’re afraid of the implication of our answers, just like when we’re being deceptive. Liars often accidentally drop their volume because they don’t believe their own answer (and don’t want you to notice the lie).

But we don’t only use it when we’re lying—we also drop our volume when we feel guilt or nervousness. Check out the video above to hear the volume drop (timestamp 11:30).

Along with her volume, you may also notice Princess Diana rubbing her upper chest in a self-soothing gesture. Any time we massage this area (also known as the suprasternal notch), we’re feeling anxious or stressed and need to relax a bit.

Princess Diana, the Princess of Mystery?

One of the reasons we were so captivated by Princess Diana is that on one hand, she showed such confidence, elegance, and beauty. But on the other hand, she showed nervousness, contraction, and contempt.

When we watched Princess Diana, her cues confused us, which made us want to know more.

Now on to you! If you loved this article and video, then head on over to our ultimate body language guide, where we cover all the body language cues from head to toe! Also check out my breakdown of Barack Obama’s cues: